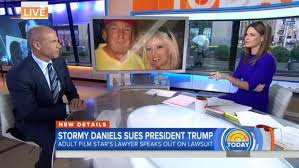 This morning on the most-watched ‘talk show’ the brilliant California lawyer for the sex worker Stormy Daniels, Michael Avenatti, who has been impressing television audiences since the start of that spotlight case, mentioned that he had often predicted that ‘Trump will not finish his term’.  That prompted me to look up the articles in which I had predicted that the president would resign. Here are the links: http://www.otherjones.com/2017/08/when-democracy-backfires-reprinted-from.html, http://www.otherjones.com/2018/01 my-take-on-trump.html,http://www.otherjones.com/2018/03/us-teens-fighting-for-our-lives.html, http://www.otherjones.com/2018/04/will-trump-resign.html, http://www.otherjones.com/2018/04/media-first-mentions-trump-might-resign.html.  (All of these links work, even though not all turned blue…).
Avenatti’s prediction followed a recording of the President saying things on an earlier morning show that basically guaranteed he could be accused of perjury by the Special Counsel.  It appeared to show the President contradicting himself in such a flagrant manner about the Stormy Daniels affair that he could no longer escape serious legal implications.  After claiming for weeks that he knew nothing about a payment to the young women accompanied by an agreement that she would not talk about her affair with Trump a few days before the election, this morning he blurted out that Michael Cohen, a sometime lawyer, but mainly ‘fixer’ for the president, “represented me on that cray Stormy Daniels affair”.
The French President’s stunning address to a joint session of Congress yesterday doesn’t stand a chance of being held over today for further analysis (which it richly deserves), preparations for the upcoming meeting between Trump and Kim Jong Un are relegated to an inside page, as newscasters discuss the extent of the President’s blunder.  (Yesterday, in an unprecedented move, Cohen announced he was ‘taking the fifth’ meaning the Fifth Amendment to the Constitution which reads “No person shall be compelled in any criminal case to be a witness against himself,” which allows persons accused of a crime to refuse to answer questions in court. This appears to be the first time that a lawyer to the President of the United States has ‘taken the Fifth’, and the media is falling all over itself with glee.
As the official White House doctor, a youngish Admiral in the US Navy who has served under three presidents, withdraws his nomination to head the largest federal agency, ‘Veterans Affairs’, after being accused of various kinds of bad behavior, the President, who offered him the job because he likes him, is looking increasingly like a cartoon character. Simultaneously, the stunning congressional address yesterday by France’s youngest president, Emanuel Macron, filled with references to America’s great leaders, was the sharpest counterpoint anyone could imagine to the cartoonish White House occupant.
Posted by Deena Stryker at 3:37 PM