US Teens: Fighting for Our Lives

The most remarkable thing about yesterday's rally in Washington D.C. organized by students who survived the shooting at a Florida high school five weeks ago was its professionalism. Maybe they had coaches - even eleven year old participants were at ease at the microphone in front of a crowd estimated by the usually skeptical press at close to a million -- but their passion and determination were spontaneous -- and deep. (Unexplained is MSNBC’s claim that people marched against guns in cities around the world.)
As in every political rally in the US today, music played a big role, with well-known singers performing and egging on the crowd’s commitment to change.  The reason why the sixties protest movement missed that mark was perhaps because Black Lives Matter was still in the distant future, opposition to the Vietnam War dominating the headlines. (Although school shootings affect all communities, Black Americans are the most often victims of gun violence, and they figured prominently in yesterday’s event.) But raised clenched fists were also ubiquitous, and recent polls show that socialism is making a comeback among American youth. 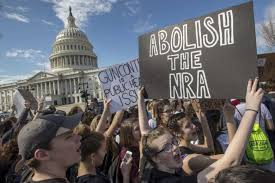 Whatever the explanation for the sixties failure to breach the barriers against socialist thought, America’s politicians now see the writing on the wall: change is coming and it is not likely to stop with a revolution in gun laws. (This makes the New Yorker’s decision to feature a dozen teen-age gun enthusiasts all the more shocking, but the US’s most sophisticated weekly often allows sophistication to win out over intelligence…)
The least we can expect from this movement, whose rallying cry was ‘register and vote’, is that, together with the Me Too movement that is propelling female candidates, it will help the Democratic Party take back congress in the mid-term elections, but the new representatives may be much farther to the left than ever envisaged by Hillary Clinton. The very notion of abolishing the NRA suggests the hope that the state will, on questions of life and death, overrule private initiatives.
The question is whether President Trump’s appointment of a rabid war-monger, Robert Bolton, as his National Security Advisor, shocking even many Republicans, will allow the country to indulge in peacetime elections in the fall. Since this appointment does not require the assent of Congress, the best we can hope for is that Trump intends it either as a distraction from testimonies by women with whom he had extra-marital affairs, or as a bargaining chip against impeachment for collusion with Russia.
On the other hand, the president’s recent career advice for students was ‘Don’t run for president’.  Maybe I was not so far out on a limb when I wrote that he might resign in order to avoid the latter http://www.otherjones.com/2018/01/my-take-on-trump.html.....

Posted by Deena Stryker at 8:20 AM