We’ve seen government by tweet, and even firing by tweet (former Secretary of State Rex Tillerson, no less), then we saw a high-level justice (sic) department figure being fired a few days before his legal retirement, the aim being to deprive him of his pension!
We can only hope that this petty act would fail to stand in a court of law, however, many dangerous things have happened since Donald Trump became president, for example the fact that US policy toward Qatar was affected by how that country treated the president’s son-in-law’s request for a business loan. 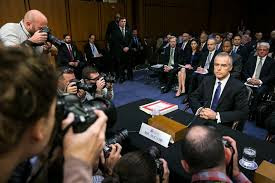 More ominously for Americans, President Trump is ‘packing the courts’ with judges who will back the ultra-right policies of former White House aide Steve Bannon (who recently told members of France’s National Front to shrug off accusations of racism, and is involved, together with the billionaire Mercers, in Cambridge Analytica). Trump’s reluctance to follow through on a decision to raise the minimum age for purchasing a fire arm from 18 to 21 may not be due to the National Rifle Association’s financial power, as observers assume, but to the need to keep his base armed and ready to ‘take back’ the country from students who have suddenly awakened to the failures of the current system after seventeen people were gunned down in an up-scale Florida high school.
There is unanimous agreement that the student protests were the start of a process that could achieve what the sixties movement failed to do: move the political needle to the left, starting with voting out of office members of both parties who take NRA money.


What may be still be disastrously missing, however, is sufficient awareness of the deep state’s determination to take on Russia and China.  When it comes to the only countries that could challenge the United States as ‘leader of the (sic) free world’, adult ‘progressives’ appear to be looking nervously over their shoulder at McCarthy’s ghost, and this reflex could well carry over to the current generation, if the media has anything to say about it.

Posted by Deena Stryker at 7:08 AM