Kelly vs Putin: A Clash of Civilizations

(Published on NEO circa March 14) 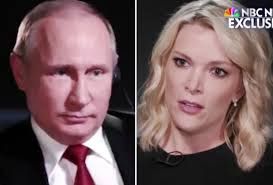 The main takeaway from Megan Kelly’s two-hour long interview with Russian President Vladimir Putin is that with Communism gone, the US and Russia are dealing with a clash of civilizations. Not the barbaric east versus a sophisticated west — or even the lumbering grizzly versus the high-flying eagle — but much more importantly in the age of instant annihilation, cooperation versus ‘gotcha’.
To her credit, Kelly has labored mightily to consign to the ‘dustbin of history’ the image of the dumb blond: maintaining just the right body angle to the camera, blond wavy locks set off with just the right shade of (wine-raspberry) lipstick and delicately contoured green eyes, it’s too bad that her intelligence serves a relentlessly adversarial agenda. (In a short interview with an American colleague, Kelly mentioned that President Putin had ‘tried to be nice off camera, saying how much he cared a bout his grandchildren’, so even before watching the interview we knew that its purpose was not to promote understanding between two nuclear-armed countries but to dot the i’s and cross the t’s on ‘a relationship that could only be adversarial.
Kelly was not interested in finding out how the president of the largest country in the world, whose popularity ratings have been in the eighties for almost two decades, brought Russia back from desperate straights, even less in his worldview, but exclusively in why he developed certain weapons rather than others (trying to show her mastery of complex weapons systems), with respect to disarmament agreements that each side accuses the other of abandoning — the interview coming on the heels of President Putin’s roll out of new deterrents — and most importantly, whether he sent Russian citizens to disrupt our recent presidential election.
Kelly attacked Putin from all angels on that matter, trying to elicit the disdain for the rule of law that viewers expect from a leader routinely described as a ‘thug’. She faltered, however, however when the president pointed out that he had a law degree, jumping in with “I do too”, instead of pointing out that perhaps the relatively new Russian legal system might still have a few kinks, which would have been a more polite (I hesitate to say ‘friendly’!) approach.
Asked repeatedly, in a tone that implied that this would be the right course, whether his government intended to take legal action against the thirteen Russian individuals and three Russian companies accused by Robert Mueller of ‘meddling’ in our 2016 election, Putin patiently explained that this could not happen unless the accused had violated Russian law. Refusing to extradite them, as Kelly seemed to think would be proper, he repeated: “Send us documents, the prosecutor will look at them”.  This was the only point at which the superbly controlled Putin became ever-so-slightly animated, his interlocutor clearly not compre-hending why he should insist on following internationally recognized legal procedure.
Almost two hours of repeated attempts on Kelly’s part to obtain a confession of bad behavior from the Russian president suggested that she harbored not the slightest suspicion that American ‘democracy’ is in reality the most elaborate form of oligarchy the world has ever seen.  Or that she recognized it was no match for a gold-plated billionaire with a Bronx accent who prefers deals to war, and whose troops are armed and ready to ‘take their country back’….
Kelly also appeared to have bought the idea that a leader exclusively tagged as a ‘former KGB officer’ would do a ‘gotcha’ in retaliation for Hillary’s backing of 2011 anti-Putin demonstrators. Apparently, it did not cross her mind that instead of indulging in  childish tit for tat, any election mischief that may have taken place — hardly comparable to the US’s practice of ‘regime change’ — would have been triggered by NATO’s steady drang nach osten, in flagrant violation of promises made to Mikhail Gorbachev that the western military alliance would not move one inch beyond a reunited Germany’s eastern border.
Surely any responsible head of state would take seriously the threat posed to his country when foreign troops and tanks line its historically vulnerable border? (At one of the many international fora organized by the Russian President last year — and routinely ignored by the US media — he wondered with his hallmark irony whether this massive military ‘exercise’ was Washington’s way of ‘bringing democracy’ to Russia…..)
When Kelly asked him whether he had ‘groomed a successor’ Vladimir Putin responded that one would surely arise when the time came. His hope was that Russia’s new leader would continue the progress he had overseen, whether in terms of agriculture, high tech, education or universal health care. Asked about his much covered but short-lived opponent, Alexei Navalny, the president recognized that in certain cases a conviction for fraud might not prevent someone from running in an election, the problem was that Navalny’s platform had only one plank: beating corruption (which he correctly noted exists to a greater or less extent in all countries). Kelly was smart enough not to mention the other candidate, daughter of Putin’s former boss, Xenia Sobchak, who was invited to the US and featured on television, but showed her lack of political acumen by declaring that if she were to visit Crimea, she would access that part of Russia by way of Ukraine.


Kelly’s interview deliberately steered clear of the fact that Vladimir Putin and China’s Xi Jinping are replacing the so-called ‘rules-based’ international order designed by ‘the center’, with a cooperative order elaborated by ‘the periphery’, where most of the world lives, in a civilizational turning point.
Posted by Deena Stryker at 9:43 AM