US Media Take on Xi-Kim Meeting

In the lead-up to talks between Donald Trump and Kim Jong Un, the latter supposedly made his first trip abroad since becoming the leader of North Korea, his green train with yellow stripes seen gliding into a station in Beijing.
First of all, given the discreet nature of North Korea-China relations, the US, for all its technology, is probably not in a position to know that this is Kim’s first live meeting with the China’s Xi (who, by the way, just obtained life-long power). For decades, the US media has correctly pointed out that North Korea is overseen by China.  But even the fact that the train is identified as 'the same oone used by Kim's grandather to travel to Beijing -- is not expected to remind Americans of China-North Korea history, so the presstitutes treat the latest events as unique. 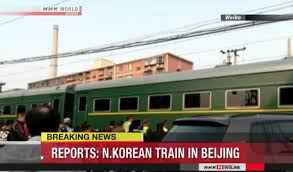 The idea thuy came up with, that “China wanted to get into the act” is ridiculous.  Who is it that has been keeping North Korean people in food and fuel?  Going back to the beginning of the standoff with the US, we had correctly identified China as the North’s backer in the nineteen-fifties war for control of the entire Korean peninsula.  Alas, the day’s fleeting demands always take priority over history for the western media, so although Kim clearly wanted the world to know about his meeting with Xi, it is announced in the US as a first  between the young trouble-making client and the head of the most populous country in the world, its sole purpose to enable China to ‘not be the third world leader’ to have a one on one with Kim!


Here’s hoping that the powerful youth movement inspired by he irrelevance to the modern world of a colonial constitutional amendment, will include in its review of government performance how Americans are informed on their country’s foreign policy.
Posted by Deena Stryker at 7:24 AM