The Guardian revealed today that in 2012-2013 — at the time when the Obama administration was trying to ‘reset’ relations with Russia, Donald J. Trump and a band of Russian and Latvian acolytes were trying to put together a deal to build a casino in Riga.  And (gasp!) a couple of the people involved in that effort were among the attendees at the infamous June 6th 2016 meeting at the Trump Tower, at which ‘dirt’ on Hillary was supposed to be discussed but wasn’t. 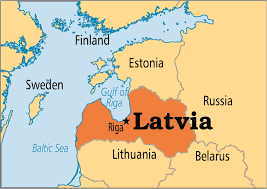 I generally regard the Guardian as pretty reliable when it comes to facts, but this time so much is missing that I wonder whether part of the story simply disappeared in a technical glitch. According to best journalism practices, the facts I’m referring to concern the situation of Latvia from 2012 to the present.  In 2012, Latvia was an independent Baltic country with a western-oriented government. Vladimir Putin was being reelected for a second term, and Hillary Clinton, Obama’s Secretary of State, was  supporting the Russian opposition, that carried out several noisy demonstrations against the president and his alter-ego, Dmitri Medvedev, who had enabled Putin’s program to modernize Russia to continue unchallenged by agreeing to be president while Putin was Prime Minister.  This heretofore unheard of complicity hardly ranks alongside Citizens United, but thousands of Russians had become convinced since the disintegration of the Soviet Union that it was aways a bad idea for the same person to rule for too long.  In order to emulate the West, Russia had to have a two party system, in which money played the determining role, leaders were rotated out of the White House following at most two four-year terms, and the 1% saw to it that their needs were met.
But I’m digressing. Back to Latvia, a Baltic country whose pre-war fascist government was taken over by the Communist Soviet Union, to once again gain independence with that country’s demise in 1991. Latvian (like its brother Lithuanian)  is unrelated to Russian. Russians have lived in Latvia for several generations, however they are denied citizenship unless they can pas an exam in Latvian. Like all the other countries of Eastern Europe, it aspired to be part of ‘the West’, which meant being admitted to the European Union and NATO.  Latvia achieved this dual goal in 2004 and in 2015 it held the rotating presidency of Council of the European Union.
In 2014, Latvia was anointed The Capital of European Culture, thus in the lead-up to that designation what could have been more normal than Trump’s initiative than to build a glitzy hotel and entertainment complex in Riga, the capital, with Russian and Latvian businessmen?
Well, that initiative has been swept up in Special Counsel Mueller’s investigation of whether Trump colluded with Russia to gain the presidency in 2016! (While Russia was anointed as US ’enemy’ in 2016, in the case of Latvia, we’re talking about a country that has been a member of NATO since 2004! Not to mention that since June 2017, it has proudly welcomed NATO troops, as announced on the NAT0 website https://www.nato.int/cps/en/natohq/news_144993.htm:

NATO Secretary General Jens Stoltenberg paid tribute to Allied forces during a ceremony on Monday (19 June 2017) to mark the deployment of the NATO multinatio-nal battlegroup in Latvia. It is one of four now fully de-ployed to the eastern part of the Alliance in response to the changed security environment. Canada is leading the NATO battlegroup in Latvia, Germany and the United Kingdom are leading similar forces in Lithuania and Estonia, while the United States commands a NATO battlegroup in Poland.