Today's news reminded me of the nineteen-seventies call for a New World Information Order by Third World leaders.  Their case for responsible reporting was rudely rebuffed by the West, which still clings to the fallacy that the media is a watchdog over government, while resisting any notion of 'governmental control over it.  Since the birth of internet news sites, this stance, while appearing to correspond to the highest ideals, has been exposed as a sham. 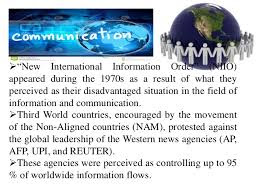 The battle between Western notions of news, which was gradually imposed on corporate news entities around the world, and a burgeoning internet free-for-all has failed thus far to modify the underlying assumptions that color news reports in the US as opposed to other 'western' nations, such as France, for example.

Today's reports on the historic encounter between the leaders of North and South Korea provide a stunning example of these fundamental differences.  In the US, the emphasis has consistently been 'let's not let our hopes run away with us: we've seen all this before'.  Francd 24, meanwhile, revealed the details of the statement published by the two sides, which enumerates the many ways in which they plan to cooperate.

The differences are so stark as to force the question: Is the US emphasis on low expectations and 'bad news' part of the overall charade consistently played out by American leaders to the effect that things are rarely as good as they seem, implying constant readiness on the US's part to demonstrate that it is the 'indispensable nation', by stepping in at the slightest hint of discord anywhere?
Posted by Deena Stryker at 10:28 AM