Imagine that you travel to a small town in a foreign country to visit your father, who is living there.  One day, the two of you are found on a park bench near death.  The locals whisk you off to the local hospital, where, after heroic efforts, your own health is restored. 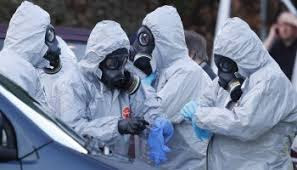 Upon discharge from the hospital, however, you are not offered hospitality in a comfortable hotel while awaiting your relative’s release.  You are taken to a place that is kept secret from all inquirers, including family members back home.  A cousin has been denied a visa to visit you, no one other than agents of the host country has been permitted to see you in hospital  — and apparently this regime will continue until your hosts decide otherwise.
Interestingly, while all this has been going on, your hosts have accused your own countrymen of having sought to eliminate you and your relative - or perhaps you, specifically were unexpected ‘collateral damage’…..Or perhaps the attack on your relative was timed precisely to coincide with your visit, in order to ensure maximum indignation on the part of your country’s government.
Although the incident that nearly cost you and your relative your lives immediately became front page news, your release from hospital to an undisclosed address was buried among the obituaries.  The Russian embassy in London, also denied access to you, has asked in vain to be informed by you that it is your wish that your whereabouts remain undisclosed.
The United States has apparently offered to relocate father and daughter in the US under new identities, but that “offer” probably troubles the Russian authorities as much as it must unsettle the victims of the so-far unidentified poison they endured. Will the Skripals be free, having recovered from near-death, to live where and how they choose, or will affairs of state determine how and where they continue to live in order to prevent them from saying anything to expert investigators posing as tradesmen that could enable the world to discover where guilt lies.
Were Yulia Skripal anything but a Russian citizen, we can be sure that Great Britain would not even think of keeping her hostage.
Posted by Deena Stryker at 6:42 AM