I suggested this in  an article on the propagandist Bernays drafted on March 22, but which due to technical problems at NEO will only been published this week.  Soon after that writing, during a campaign speech, Trump hinted that perhaps he was a better builder than president, quickly adding, 'I'm a good president' or words to that effect.  This afternoon during MSNBC's four o'clock talk show I saw a crawler saying something like 'Trump hints he might resign', a propos his freakout over the FBI search of his personal lawyer's office, and his illusion that he has the authority to fire Robert Mueller.

I started thinking months ago that Trump would resign, simply because it would be the easiest way out of the growing number of scandals and investigations.  Having discovered that he cannot 'beat the presidential system' as successfully as he beat the business system, I can well imagine him putting on a show of humoungous indignation at the ingratitude of the political class.  He will say something like:  "Why should I put up with this?  I hate to disappoint the little people who support me, they know I tried to help them, but Washington keeps putting up roadblocks." 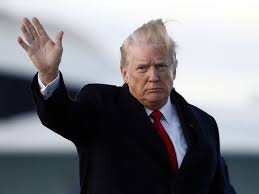 Trump's resignation will not happen in order to avoid impeachment for 'colluding with the enemy', but in the hopes of being able, from outside the White House, to better manage the legal challenges to his and his families' businesses.