If You Had Been Watching France 24 Recently... 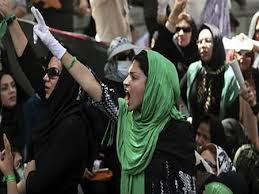 ....you would have discovered Pashtun women leading demonstrations.

Maybe you never heard of the Pashtuns: they're one of the major tribal groups in Pakistan.  We used to hear about them during the war in Afghanistan, one of its neighboring countries, but Pakistan has not been in the news lately, so who remembers the names of its tribes? Aside from being the country where Osama bin Laden was discovered hiding and killed, Pakistan is the only state created in the name of Islam.  This was done in order to separate the Muslim population from the majority Hindu population of India, back in 1947, when India won independence from Great Britain. Pakistan is  the fifth-most populous country with more than 209,970,000 people, including ten ethnic groups, the largest being the Pashtuns, Punjabis and Kashmiris.

Why do you need to know this?  In order to reinforce the theoretical knowledge that resides in your head, but is generally relegated to tenth place, to the advantage of events much closer to home and more familiar. When in 1972, Donnella and Dennis Meadows put futurism on the map by publishing a book called Limits to Growth, they pointed out in a graph in the preface that people mostly pay attention to familial and local events, their attention diminishing as events moved farther from their home turf. That phenomenon is particularly true of the population of the United States. Most countries jostle with several neighbors, often on an equal footing, so their citizens are familiar with those 'others' and aware of their impact on their own lives. The US is unique in that, from east to west, it must contend only with two vast oceans, its only immediate neighbors being Canadians and Mexicans.
So why should Americans care about the Pashtuns? It's that, thanks in part to cell-phones, women who still cover their heads with the traditional Muslim headscarf, or hijab, have adopted Western political ideas and organizing techniques.  They can be seen on France 24 in rallies demanding that government keep its electoral promises. The fact that Benazir Bhutto was the first women to be (twice) Prime Minister of a Muslim country has undoubedly inspired Pakistani women, even as a succession of more or less inept male leaders have paraded by.

But then again, why should Westerners care, in particular Americans, who are separated from Pakistanis by one or the other of our two oceans, whichever way they look?

For the same reason that Americans need to care about every other corner of the world in order to evaluate the work of their government.  Right now, Congress is debating whether to approve Mike {Popeo a known hawk and former head of he CIA as Secretary of State.  The word has been put out that he agrees with the President that America shoud not get embroiled in more wars overseas, but his experience is precisely in the pursuit of enemies, from his training at West Point to heading the world's biggest international spy organization.  Knowing that the increasingly highly educated women of a country whose place in history has heretofore been defined mainly in terms of strife are on the same wave-length as American women should surely be of interest to these latter as they weigh their votes as well as their backing of the 'Me too' movement.

Posted by Deena Stryker at 6:24 AM