A Snake in a Net

If the Russians wanted to sow chaos in the US via the 2016 election, they succeeded beyond their wildest hopes: the president, who is theoretically the most powerful man in the world, is like a snake caught in a net, able to move about, but unable to escape the net, writhing desperately, via Twitter, as his handlers look for any way to eliminate him, whether for fornication, money-laundering, or more importantly, cozying up to Russia. As the Mueller investigation of the Trump campaign for ‘collusion’ with an ‘adversary’ appears to be wrapping up, American newscasters no longer bother to preface their accusations against Russia with any qualifying language, such as ‘So-and so claims’ or ‘Evidence appears to point to’. They simply declare as fact that ‘Russia poisoned a former KGB agent and his daughter in Great Britain’. They ‘wonder’ in feigned puzzlement what the Russian president might have thought he would gain by ordering an attack on foreign soil, but fail to report Russian assurances that had Novichok really been used, anyone touched by it would be dead.
So determined are the US and its allies to build a case for war with Russia that they appear indifferent to the possibility that this might lead to the end of human life on earth. As part of this charade, Britain’s Foreign Secretary announced that his country has no quarrel with the Russian people, claiming that ‘They are not surrounded’. But that claim, suggesting that this is a false Russian belief, was strictly for domestic consumption. Russians know that their western borders, from the Baltic to the Black Sea, are lined with NATO troops, tanks and missiles, while many Brits — like many Americans — do not. 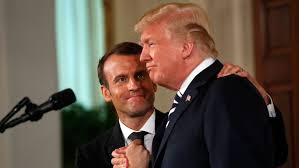 The fact that Prime Minister Theresa May mounted a vigorous campaign among NATO countries to ensure that they would join her in expelling Russian officials in retaliation for the Skripal poisoning, does not mean that the British public is aware of NATO’s actions on the ground. Europeans, however, are aware that their troops have moved (or rather been moved) steadily eastward, since the dissolution of the Communist military alliance, the Warsaw Pact, in the early nineties. That awareness is attested by the small number of Russians each of them expelled, for a total of about a hundred. (There are 28 countries in the European Union, eight of which — Portugal, Austria, Bulgaria, Cyprus, Malta, Slovakia, Slovenia and Luxembourg — failed to expel any.)
For France, Germany and the others to expel a handful of diplomats each, is, after all, a small price to pay for the continuing ‘protection’ of NATO against a neighbor with whom all do business. During Angela Merkel’s three hour trip to Washington to talk business she artfully assured a journalist that when she declared several months ago that Europe had to start taking matters into their own hands as Europeans she meant that it had to beef up its contributions to NATO and not expect the US to foot the costs of their protection. This, on the heels of Macron’s insistence that Trump not trash the crucial treaty with Iran, and pundits warned that doing so would demonstrate to Kim the futility of entering into agreements with the US.
Suddenly, these nuances seemed irrelevant, as the presidents of the two Koreas embraced on the demarcation line and proceeded to enjoy a formal dinner with their spouses, as if there had not been 70 years of strife between them, aided and abetted by the US. Newscasters emphasized the uncertainty of the ultimate outcome of the rapprochement, attributing what was obviously a heartfelt North-South reunion to President Trump’s sanctions, and almost betting that Kim would renege on his promise to denuclearize. However, it apparently did not occur to them that it was Little Rocket Man who had pursued the superior strategy, forcing the US to ‘come to the table’ by demonstrating that he could hit any American city.
Giving credit where it is due, even a snake in a net recognizes that.

Posted by Deena Stryker at 4:57 PM