Certainly kudos go to President Trump for ending a sixty-four year old standoff, but let’s not pretend that Rocket Man played no part. When news anchors mention that a deal would bring an end to the Korean War, they are not merely talking about a formal end, they are referring to a really dangerous situation that was modified, not by the US, but by North Korea. 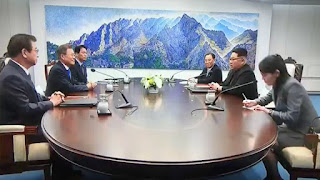 The US is not in the habit of recognizing any merit with respect to any other country, and this has certainly been the case with the North Korean leader.  The way things look right now, only a Trumpian-style blunder is likely to put a spanner in the denuclearization of the peninsula, so it’s time to give credit where it is due: Kim Jong Un gradually built up his nuclear and missile-delivery capacity to the point where the US had no choice but to ‘come to the table’ — ‘bearing gifts’.
The agreement being hammered out with Kim could have happened sixty-four years ago, putting a formal end to the war, but the US preferred a divided Korea, in keeping with the then prevalent ‘domino theory’. The war was fought to a standstill in order to prevent China’s new Communist regime from spreading to its neighbor, and half a loaf was better than none.  ‘Peace’ was not permitted.
As the US looks on, the leaders of the two Koreas have met, not just to reciprocally step over the demarcation line between the two regimes, but also to enjoy a banquet with their spouses and a meeting invovling top figures from both sides.  Americans did not see this on their television,s but the rest of he world did.  (I followed the events on France 24...) Even merely seeing evidence of these meetings made clear that they did not take place thanks to a suddenly benevolent Uncle Sam.  As soon as they realized that President Trump was determined to avoid a nuclear catastrophe on American soil, North and South Korea were free to meet and implement agreements that had obviously been waiting in their drawers,  as Kim pursued his nuclear campaign.
Only when it became clear to Washington that the ‘little dictator’ could actually nuke a US city, did the US agree to the terms of a peace treaty which, if implemented in 1953, would  have spared the North Koreans decades of privations.

Posted by Deena Stryker at 8:12 AM