The Jerusalem Bonus and Other Revelations

By moving the US Embassy to Jerusalem, Donald Trump appears to have achieved something his predecessors never foresaw: condemnation by the MSM of Israel’s murderous apartheid policies, with popular sentiment appearing to follow. 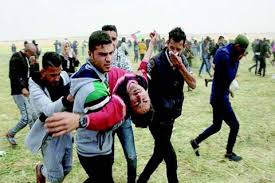 To be sure, there are still ‘experts’ who appear to accept the Israeli claim that Hamas is responsible for encouraging its people to get themselves killed by charging the Israeli border. (’David’s’ response to ‘Goliath’’s tear-gas charged drones is to lob lit candles tied to balloons over the border, allowing Israel to claim it is not shooting peaceful demonstrators but only those ‘attacking’ it….)
Shortly before the first Intifada, in the mid-eighties, I visited Israel from my home in Paris, and wondered why the government had not from the start offered to share its wide-ranging expertise with its neighbors, in order to dispose them favorably toward the Jewish state that had been parachuted into an all-Arab region. It was not until the recent US Embassy ceremony in West Jerusalem that Prime Minister Netanyahu suggested that Israel was prepared to do just that — if the Palestinians would renounce their claim to East Jerusalem.
A week after the Embassy move, as France 24 debated the situation with various European observers, the highly professional anchor could not hide his astonishment when a German journalist, his expression similar to that reserved for a civilian mass murderer, declared that the Gaza shootings had finally shattered Germany’s unconditional support for Israel. Another participant in the debate revealed a gap between the attitude of Arab leaders and their respective streets, as well as the fact that in the West, Islamic terrorism had had he effect of downgrading the Palestinian plight.
On May 20th, Tom Friedman, a popularizer of sociology who invariably pushes my buttons, admitted on CNN’s Fareed Zakaria that ‘Israel does bad stuff’. Friedman noted that younger American Jews no longer share the iron-clad pro-Israeli stance of their parents: as participants in liberation movements, from Black Lives Matter to LBGT rights (and a women’s rights campaign down-graded by the ‘Me-Too’ Movement), younger American Jews realize that Israel’s treatment of Palestinians is far more more reprehensible than Western social movements.
In a rare show of daring, Zakaria brought in longtime Palestinian spokesperson Hanan Ashrawi, but her claim that Gazans are not being manipulated by Hamas did not convince Friedman, who criticized Trump merely for not hinting to the Palestinians that another US Embassy could see the day in East Jerusalem. Meanwhile, in its striving for legitimacy in the eyes of a largely hostile world, Israel, never missing a beat, joined Sunni Saudi Arabia’s campaign against Shia Iran, while cozying up to Iran’s ally Vladimir Putin for extra insurance, (Americans being largely ignorant of the Russian President’s efforts to bring opponents around the world to the negotiating table.)
Notwithstanding this unanticipated change of attitudes toward Israel, the American MSM spent more time on a remark at a White House meeting, than on the Middle East. A young staffer’s remark that the president needn’t worry about Senator John McCain’s opinions because he was “going to die soon”, was interpreted as an insult to a national hero rather than a clear-eyed statement of fact. The woman who made the remark was pressured to telephone McCain’s family to apologize and assure them that she would do so publicly. The fact that she did not follow through on that promise gave the fourth estate yet another occasion to call attention to Trump’s lack of decorum, which gets far more attention than his use of military force.


Finally, and most alarmingly, new revelations by the Mueller investigation show that not only Russia, but the UAE and Saudi Arabia, (whose agents include the American Erik Prince, owner of a militia for hire), met with Donald Trump Jr., offering to support the Trump campaign in return for expected favors. The existence of an international mafia that appears to involve governments of right and left suggests that the successful impeachment of the American president — now timidly evoked — would not affect the international political and economic landscape in any meaningful way.
Posted by Deena Stryker at 9:45 AM