Eastward From the Koreas

Published on May 14th by NEO, updated May 15th
Certainly kudos go to President Trump for ending a sixty-four year old standoff with North Korea, but let’s not pretend that he was in charge of the process. When news anchors mention that a deal would bring an end to the Korean War, they are referring to a formal treaty that would end an increasingly dangerous situation created by the US sixty-four years ago — and now modified by North Korea.
All the drip drip in the world — Mike Pence meets Kim, Kim and his wife spend a day with South Korea’s presidential couple (US reports confined to the ballet between the two leaders on the dividing line), Trump surrogates bring up the possibility of a Nobel Peace Prize, announcement of the location (Singapore which, under authoritarian leadership, has become an Asian Tiger), Korea releases three American prisoners, Trump announces the June 12th date — none of this can change the fact that the credit goes to Kim Jong Un.
No American journalist has acknowledged the fact that while appearing to behave like an adolescent, North Korea’s leader was diligently building up his nuclear arsenal and missile-delivery capability to the point where bombs could reach the US mainland (never mind Japan and South Korea). That is when the US suddenly ‘decided’ that the time had come to end the division of the Korean peninsula. (France 24 is forgiven for recycling a report on South Koreans queuing up for North Korea’s signature cold noodle dish, since, unlike the US media, it also covered the day-long visit between the two leaders and their spouses, including the formers’ joyful expressions and body thumping.
While the US continues to fret over weapons, for both Koreas, this play is all about getting back together, a move which the US has until now prevented. Younger Americans will not be brought up to speed on the history of the Korean War, fought according to the then prevalent ‘domino theory’, to prevent Chinese Communism from spreading to its neighbor. The press will not mention that, having fought the war to a standstill, the US refused to allow a formal treaty, opting for half a loaf: a capitalist south with a 25,000 strong ‘defensive’ force. Although the US has long since made up with Communist China, which now touts ‘capitalism with Chinese characteristics’, a reunited Korea would still not be in the offing had Kim not stuck to his all or nothing stakes.
Between now and the fateful meeting, American academic and political pundits will continue to express doubt that North Korea will actually dismantle its nuclear program, evoking past unkept promises without referring to Washington’s own failures to deliver on aid, and never acknowledging that the US was faced with a choice between being nuked and coming to the table. The North’s operable words are ‘working toward denuclearization’, while the US gives the impressions that it expects denuclearization to happen overnight. In a bizarre demonstration of logic, even normally level-headed progressive Representative Barbara Lee declared that Trump’s abandonment of the Iran Agreement was ‘proof’ that Kim would not follow through on denuclearization! Instead of recognizing that Kim has seamlessly switched from outrageous rhetoric to traditional diplomatic protocol by releasing three American prisoners in advance of the summit, pundits continue to spout the rhetoric of the previous phase, signaling their own lack of intellectual flexibility. 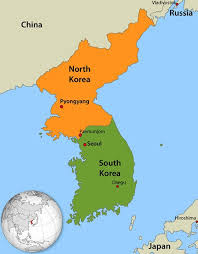 Indeed, the US appears so clueless that it didn’t think it had to reciprocate Kim’s gestures. Kim’s hint that he expects the US to reciprocate his having initiated the dismantling of his nuclear program by cancelling its latest military drills with South Korea is seen instead as a first sign that there can be no deal.  It never crosses an American military or political leader's mind that it should have to make a goodwill gesture toward any other country, least of all one which has supposedly pulled the plug on previous deals.
Donald Trump’s simultaneous abandonment of the nuclear treaty with Iran that is recognized by all experts as working, may have been intended to show that the US still calls the shots, but it also gives Kim a reason to wonder how tight his own deal with the US will be.    However, having given Israel a green light to attack Iranian positions supporting pro-Shia President Assad in Syria, moved the US Embassy to Jerusalem and declared that he will punish Europeans who do business with Iran, “Trump will create the greatest division between Europe and the U.S. since the Iraq War,” in the words of Robin Wright: https://www.newyorker.com/news/news-desk/trump-destroys-the-iran-dealand-a-lot-more?mbid=nl_Daily%20050918&CNDID=50461342&spMailingID=13475791&spUserID=MjA3NzYwNDgyMjE3S0&spJobID=1400829189&spReportId=MTQwMDgyOTE4OQS2.  Coming on top of the 2008 financial crisis and the avalanche of third world refugees fleeing US wars, the prospect of economic sanctions have only reinforced the conviction of Angela Merkel and Emanuel Macron, the US’s closest European allies, that the old continent must be free to choose its friends.


On the other hand, Donald Trump may hope that a European turn toward Moscow will limit the ability of the American deep state to prevent his own rapprochement with Vladimir Putin.

Posted by Deena Stryker at 3:28 PM