Angels Dancing on a Pin

Posted on NEO on May 10th 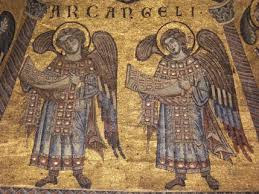 Twenty-four/seven reporting on the Mueller investigation is beginning to look like nothing so much as the medieval scholasticism summed up in the question “How many angels can dance on the head of a pin?”
As each new member of the cast of characters has his or her ‘day in the limelight’ while dreading his or her possible ‘day in court’, every sliver of information is presented as ‘breaking news’ — a headline usually reserved for earth-shattering events such as an invasion or an earthquake. Events that outside observers might consider vital are so completely absent from American ‘news’ that one is forced to wonder whether editorial decisions are politically motivated, or whether, more worryingly, the press has ended up believing its own version of reality, that excludes foreign peoples and places. The notion that the United States is ‘the indispensable nation’ implies that Americans must everywhere intervene to make the world safe for ‘democracy’. And since the media spends ever less time informing the public about that world, they are oblivious to the fact that, with NGO help, their government engineers so-called ‘popular uprisings’ that eventually end up ‘requiring’ US intervention, which are viewed as aggressions by those on the receiving end. Currently, one such uprising is taking place in the tiny nation of Armenia, which borders on Iran, Turkey, Georgia and Azerbaijan, and which, like the latter two, is a former Soviet Republic.
The US intervened twice in Georgia since the turn of the century, creating one of the most unstable governments in Russia’s near abroad (so unstable that its US educated president, Mikhail Sakashvili, was given the boot. (He went to nearby Ukraine, where he twice tried to overthrow the US-installed government backed by fascist militias). The US plan is to bring both countries into NATO, the better to get in the face of the Russian government. As happened in these nations, George Soros’s Open Society leads a parade of seemingly innocuous NGO’s devoted to the spread of American-style ‘democracy’ in Armenia.
That democracy currently relies on angels dancing on the head of a pin. The idea that Donald Trump could be impeached has made its way from Hillary voters’ minds, to those of pundits and politicians of both parties — who show off their detailed knowledge of the 1974 Watergate player who forced Richard Nixon to resign, and Bill Clinton’s ordeal with a nineties special prosecutor over an affair with a White House intern. (He was impeached but not convicted.)
Trump assures journalists that he would love to sit down with Robert Mueller, who is investigating him for collusion with Russia, while his lawyers oppose it, knowing that the president would probably perjure himself within five minutes. As if recognizing this, in a recent speech the President hinted that he could be impeached, warning darkly that this would create a lot of unhappy people, many of whom, one assumes, would be gun owners. (I tried to find this sentence on the web, but it had apparently been scrubbed.)
On the other hand, the fact that ‘born again’ Christians still support Trump, notwithstanding his egregious disregard for morality, may be less of a miracle than a way of ensuring that in 2020, he could be succeeded by Vice President Mike Pence, one of their own. Pence is pro-family and church and rigidly against abortion. His point of reference is the Old Bible which features ‘Armageddon’ in the Holy Land, i.e., Israel, followed by ‘The Rapture’, in which Christ’s followers are whisked off to heaven as the earth implodes.
The 2013 film Elysium portrays the horrific (secular) life of those left behind when the wealthy create a perfect world on another planet. By 2020, the feckless state of the Democratic Party guarantees that almost anything could happen unless dancing angels intervene.

Posted by Deena Stryker at 3:39 PM