You Read it First Here, Yesterday

If you're only watching US television -- or even the BBC --- you will not know about the really strong reaction the US Russia sanctions bill is provoking in Europe.

For someone who has spent half her long life living in half a dozen European countries on both sides of the former Iron Curtain, what is happening this week is truly remarkable. Since the end of World War II, (Western) Europe has been chained to the United States.  And since the fall of the Soviet Union, Eastern Europe gradually integrated into the European Union has exhibited even stroner allegeance to the US, the country that steadily campaigned for its 'liberation' from Soviet oversight.  (I may shock some readers by using this expression, but having lived in Poland for a year and in Hungary for five in the 1960's, I can attest to the fact that Soviet political oversight was less strongly felt by the average citizen than US cultural influence in Western Europe.)

The Atlantic Alliance, otherwise known as NATO (the North Atlantic Treaty Organization) was creaed in 1949, barely four years after the end of World War II.  Suffice it to say that the countries of Western Europe, devastated by the most brutal war in history, were in no position to say 'No thanks'. As for those of Eastern Europe, their communist and socialist parties were thrilled at no longer having to live underground.  Since the Russian Revolution of 1917, they had witnessed the defeat of the Budapest Commune in 1919, and the subsequent return of feudal governments across the region, but now they were in power.

(Joseph Stalin had insisted at the Yalta Conference with Roosevelt and Churchill in February, 1945, as the end of the war agains Hitler was in sight, that Eastern Europe become a Soviet sphere of influence in order to be sure that their lands would no longer be used by the West as the door to Russia.)

Fast forward to 1989:  the opposition and peace movements had gathered enough strength in Eastern Europe to crack the Iron Curtain, and Russian President Mikhail Gorbachev, beleaving in the good faith of the West, allowed Hungary to open its border with Austria.  Within a few months, the Berlin Wall came down and the way was open for a gradual reunification of Europe, starting with that of Germany, which occured a year later.

However extraordinarly it may appear to on-lookers, although Germany had waged three wars in one century (the first in 1870 against France), it became the powerhouse of Europe, and gradually, its leader. France, embroiled in liberation movements in its colonies, posed as Germany's political equal but remained a junior partner in terms of the Union's domestic and foreign policies.  And while a series of male Chancellors -- each one leaving his mark -- could not overcome Germany's violent past, Angela Merkel, soon to run for a fourth term, has.  Known affectionately as 'Muti' in Germany, this former 'Ossie' (East German) rose in the ranks of the Conservative Party by neutering her male colleagues one by one, and is now the foremost interlocutor of Russia's President Vladimir Putin, thanks to having been forced to learn Russian in her East German schools.  (Putin, meanwhile, spent several years in Dresden as part of the KGB, and speaks fluent German.)

What is happening now is that the US, having successfully tethered Western Europe to itself, and having been worshipped in Eastern Europe as the Soviet Union's principal foe, finds itself in the dock for presuming that its agenda could rule forever.  The Washington Consensus is falling apart, as European energy and foreign policy leaders refuse to join the latest US sanctions against Russia, that would eventually force them to buy US gas at a higher price than the gas it gets from Russia.  In fact, for the first time the Europeans, Germany in the forefront, are threatening to impose their own sanctions on the US, realizing that its foreign policy is all about money.

(At the same time, China and India are defying US  sanctions on Iran, declaring they will continue to buy Iranian oil.) 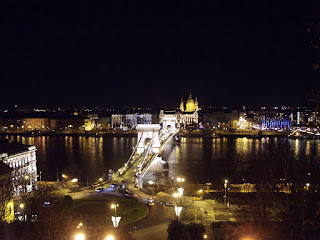 Tomorrow, I will write about Iran.

Posted by Deena Stryker at 7:34 AM