Three Stories 'Missed' by the US Media

If you're watching American television, you probably learned that President trump is worried that the special prosecutor wil discover his old tax returns --- and that OJ Simpson was granted parole.Maybe you also learned that a ten year old boy found some really old fossils.


But you didn't hear about Chinese and Russian ships patrolling the North Sea, off the coasts of Britain and Denmark - as thousands of NATO troops are massed on Russia's land borders with the Baltic States and in Poland.  Moscow and Beijing are using the same reasoning that the US uses when it sails in seas that are close to the territorial waters of other nations, such as the South China sea:: "Hey, these are international waters...."

Another thing you will not hear on US television is that the woman at the heart of Trump Jr.'s woes, the Russian lawyer Natalya Vesselnitskaya, claimed on RT that the American businessman David Browder (son of a former head of the US Communist Party, Earl Browder) set her up to contact Trump Jr. through intermediaries, and that he has had her investigated, including on a personal level, wanting to know whether she was married and has children. She has four children, and fears for their safety.  Browder made a fortune during President Yeltsin's heyday, when the future
'oligarchs' gobbled up Russia's mineral treasures, then became a fierce critic of President Putin.

You will not know that a German NGO, "Defend Europe" is determined to take on the other NGO's that are rescuing migrants in the Mediterranean.  A spokesperson for the organization suspected of fascism explained to RT that they will help smugglers when their passengers are in danger, but they will then take them back to Libya. I will be surprised if violence doesn't erupt between the two groups.

Finally and not least, you can view President Putin's Q and A with high school students in Sochi on RT's website.  It goes on for several hours, with subjects ranging from the 'boring' curriculum for music students, to Bitcoin and colonizing Mars, and shows the Russian President is something of a polymath. 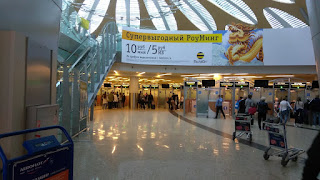 Posted by Deena Stryker at 7:42 AM