Much Ado About Not Much

I don't know whether other countries have laws similar to our election law, which stipulates that candidates cannot sollicite or accept anything of value from a foreign government, but I am ready to bet that if they do, such laws would not be used to prosecute a candidate.  The US is the only country I am aware of that is so addicted to investigating and prosecuting.

So great is that addiction that it apparently hasn't occured to any of the journalists seen salvating on tv to question why it should be a crime for a candidate to welcome support from another country.  International relations, after all, are considered crucial to a nation's governance and having allies and supporters is thus theoretically a good thing.  Why is it that an American president should not welcome Russian support?

Why should an American president not welcome evidence of support from the other major nuclear power, instead of threats?  The msm has lost sight of what's important, in its addiction to "breaking news".  And because most Americans have been discouraged from following international affairs, most are likely to internalize that message: "Russia bad" without question.

Let's get one thing straight here: it isn't because Hillary bad-mouthed Putin that Russia did all it could (I believe that) to help Donald Trump get elected: it's because had she  been elected, Hillary would have been the most hawkish president to ever sit in the Oval Office.  She made no bones about her intentions to attack Russia.  Is there anyone out there who would have behaved differently, under those circumstances?  Only a President addicted to trivia, who doesn't put the defense of his country before all else... 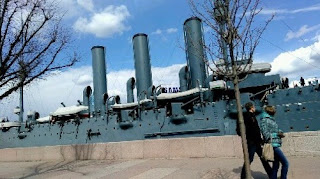 The 1917 Battleship Aurora in St. Petersburg, by Deena Stryker