During the entire Cold War, the US kept up a constant stream of warnings to Europe, that Russian tanks could be in Dunkirk in a matter of hours.  At minimum, Europe risked being 'Finlandized', meaning reduced to a noman's land between the two superpowers, much like the country of Finland, that shares a border with Russia and preferred neutral safety to antagonism.

How times have changed!  Europe has not been Finlandized, and Russian tanks have remained nowhere to be seen.  (NATO tanks, however, are stationed in all the Eastern countries of Europe as well as in Western countries, including the otherwise powerful Germany.)

As Europe's leaders, Germany foremost, have finally realized, US policy is to throw anyone who gets in its way under the bus.  It's not as though they shouldn't have seen this coming: after all, from the 2008 financial meltdown that sank Europe's welfare states, to its wars in Africa and the Middle East that prompted hundreds of thousands of Muslims (mainly young men) to storm Europe's flimsy borders, it's been clear for decades that Europe's job is to serve US interests, and not to get too cocky.

What has changed in Europe's relation with Russia after all these years that has enabled its leaders to confidently apply the brakes to their relationship with the US?  Russia has remained where it has always been; it is neither larger nor smaller than before, and its leadership has not changed.  I submit that what has changed is that starting in 2014, the US coup in Ukraine, carried out with on-the-ground help from neo-fascist militias, energized Europe's own far-right parties, just as the wave of Muslim migrants appeared for them to scapegoat.

Still in a sort of schizophrenic daze, Europe's leaders have finally realized that the only serious backing they can expect against disintegration is from Russia, which has sat quietly on its Eastern border all through its shotgun marriage to the United States.  Russia ceased long ago to represent a Communist takeover, and under President Putin, it has encouraged all sorts of cooperation. The list of political, cultural and commercial fora held each year in Russia is staggering when you consider that the US claims that Moscow is isolated.  President Putin dusted off and expanded the old Soviet formula, realizing that hospitality has always been the best way to make friends and influence people.

As European businessmen trek back and forth and young people discover the lure of this giant country with seemingly limitless wild spaces as well as a diverse population -- one young Frenchwoman I sat next to on a Paris/Moscow flight was heading to Mongolia to ride the horses -- another was the father of a new French restaurant owner in Moscow -- Russia's threatening image as a police state whose tanks were poised to assault the European plain morphed into one of the half  dozen giants that populate the Eurasian continent, together with China, India, the Middle East and the European peninsula, whose leaders have finally realized which side their toast is buttered on.

They cannot undo the disastrous consequences of the US's wars on their borders, but when ordered to turn their backs on cheap, reliable Russian gas in favor of expensive American gas by increasing sanctions as demanded by Washington, they are saying no - even hinting that they could impose sanctions on their (former) partner instead of on Russia.  One can only hope that Donald Trump is aware of this, as he considers whether to sign Congress's Russian sanctions bill. 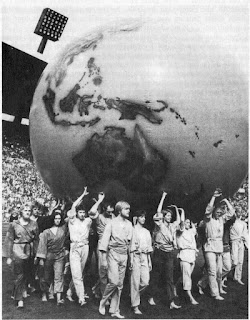 A special photo exhibition opens in Moscow on July 28, the day of the 60th anniversary of the 6th World Festival of Youth and Students, which was held in the then-Soviet capital in 1957. That festival gathered 34,000 participants from more than 100 countries. Moscow also hosted a youth festival in 1985. Photos of the 6th and 12th festivals will be shown on Chistoprudny Bulvar in the Russian capital, along with photos picturing key events of the preparation for the 19th World Festival of Youth and Students, to be held in Sochi in October, 2017. The “people’s museum of the festival,” based on Muscovites’ personal collections, a project of the Sochi festival organizers and the Museum of Moscow, will be part of the new photo exhibition.
Posted by Deena Stryker at 12:09 PM