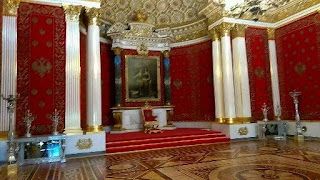 Peter the Great's Throne at the Hermitage, St.Petersburg

MSNBC can’t seem to make up its mind whether Donald Trump and Emanuel Macron love or hate each other, but I will rest my case on the fact that Macron left his assigned placed for the G20 photo shoot to come and stand on the very outside of the group next to Trump who had been assigned that place as a newcomer.
Today, the two presidents reviewed the guard at Napoleon’s tomb, and Donald Trump never looked so presidential, standing ramrod straight in the courtyard of Les Invalides.
Macron —  who has been taunted in the French press for trying to emulate Napoleon and the Sun King all at once — speaks good English and has a background in finance.  Having brilliantly won the Presidency on his first try, then capped that by gaining a comfortable majority in Parliament, his slogan could be translated as France Forging Ahead, not very different from ‘Make America Great Again’.  (Like Trump, Macron has an unusual personal history, having succeeded in getting a high school professor twenty-three years his senior to divorce her husband and marry him.)
Suffice it to say that Macron is a doer and a go-getter, but what does he want from Trump?  The answer brings us to Angela Merkel, about to run for a fourth term as Chancellor of Germany.  France and Germany have long been Europe’s leading duo, but unlike her predecessors, Merkel is recognized as primus inter pares.  As a French patriot and upstart President, Macron aims to gain equal recognition for France, which has not been the case since the Mitterrand-Kohl duo (and even then….Mitterrand hoped until the last minute that somehow Germany would not be permitted to reunite…).  If Macron could succeed, where Merkel has failed, in persuading Donald Trump to rejoin the Climate Agreement, that would go a long way toward suggesting that Europe has a new leader.
Angela Merkel has the advantage of being able to speak Russian to Vladimir Putin (benefitting from communist East Germany’s obligatory Russian studies in her youth), but Macron received the Russian president at the Versailles palace — where he proceeded to address a joint session of Parliament a few weeks later, causing the French media to loudly mock his royal instincts. 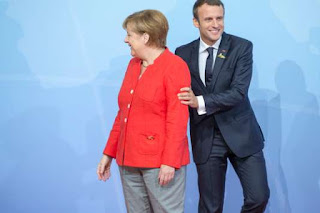 Europe as a whole is undergoing a fundamental mutation from left of center to who knows how far right.  The key question will be whether a ‘New Right’ a la Alain de Benoit will take hold, putting paid to the vociferous anti-immigrant right that has been galvanized by the massive arrival of Muslim immigrants. Europe’s leaders seem to ignore the fact, recently reported by the Economist, https://www.economist.com/blogs/graphicdetail/2017/07/daily-chart-6 that absent immigration, their populations are doomed to decline. (Donald Trump probably ignores that fact, too.)
Posted by Deena Stryker at 8:39 AM