Among the many things American newscasters never mention when seeking to explain the ascension of Donald Trump is the carnivalesque aspect of American presidential elections. I can remember being struck by the difference between the US and France when I first arrived there in the late forties. Elections were serious events, and even after the arrival of television in the fifties, campaigning was limited to interviews, speeches and debates. One of the images I was fleeing when I decided to remain in France was that of the streamers and paper horns that defined American presidential conventions.
In 2016, America’s circus-like electoral atmosphere morphed into a real circus with the election of Donald Trump. not because county fairs are favorite presidential campaigns stops, but as a result of the 24/7 commercial backdrop to everything on television. In a country that presents itself as the democracy that all should emulate, money was destined to determine events large and small, since early twentieth century businessmen from Calvin Coolidge’s “the business of American is business” to Henry Ford’s “What’s good for Ford is good for America”, let it be known. 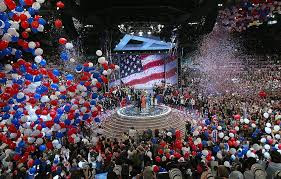 When a country’s business is business, what institutions could possibly prevent business from taking over politics? It was probably inevitable that a huckster would eventually enter the White House.. Donald Trump thought that building a tower in Moscow would lead him there, however he didn’t realize that the shades of McCarthy would intervene to challenge his legitimacy.  No longer “Are you now or have you ever been a member of the Communist Party”, has morphed into “Have you ever spoken to Russians”?
Money and the media have combined to turn political ideas into circuses before America’s very eyes, but they do not provide solutions: while Palestinians rise up against our president’s decision to recognize Jerusalem exclusively as the capital of Israel, in a battle between a secular government and religious oversight the citizens of Israel’s nemesis, Iran, are presented to Americans as seeking ’freedom’,  while the crisis with North Korea is seen mainly as threatening to weaken American ties to South Korea (indispensable to keeping in check the same China we expect to prevent North Korea from launching a nuclear war).
As the circus turns into a soap opera —  adding another brick —  or pile of money — to the wall of separation between the US and the rest of the world, each day brings a new ‘episode’ in the battle between the President and the Media, and between the Presidency and the other two branches of government, the Legislative and the Judiciary.  A Special Counsel being considered insufficient to discover ‘the truth’, the House of Representatives and the Senate are each conducting their own investigations, calling witnesses and subpoenaing documents, the press providing daily interpretations of its progress.
As pundits warn of a ‘Constitutional Crisis’ (which sounds very serious in a staid sort of way), a book entitled Fire and Fury revealing that the chaos reigning in the White House is worse than even the most cynical reporters thought, has taken over the news. However, when it turns out that Steve Bannon, who recently declared himself to be Donald Trump’s political heir, enabled the author’s access to the corridors of the White House over a period of several months,, the media fails to mention that he is the de facto leader of the Alt Right’, which for over a hundred years, was represented by the Ku Klux Klan.  The media only cares about the fact that Bannon is an open admirer of Lenin’s determination to destroy the existing political system, (thereby suggesting that Russia is responsible for his rise).  The fact that he is quoted as accusing the President’s son, Don Junior as ‘unpatriotic’ and ‘treasonous’ for taking that June meeting with Russian lawyer Natalya Veselnitskaya is considered much more important.
While the Justice Department, in the person of the Special Counsel, Robert Mueller, continues its relentless pursuit of any and all crimes that can possibly to attributed to relations with Russians — especially those ‘close to Putin’, Trump’s one-time campaign manager, Paul Manafort, who has pled not guilty to accusations of money laundering related to his work on behalf of deposed Ukrainian President, Viktor Yanukovich, is suing the Justice Department for enlarging its investigation into Trump-Russia ‘collusion’ to include unrelated matters to which he admitted years ago. (America is known for all sorts of things,  but rarely does one find it described as a lawyers’ paradise…)
If a soap opera writer had proposed a “Trump Presidential Saga” he would have been told to ‘get real’, however the American public may have to wait until 2020 to see a ‘normal’ White House. Moreover, the two likely contenders in the Republican primaries are Mitt Romney and Trump’s VP, Mike Pence (assuming that even Trump’s base tires of him or that Congress somehow overcomes its reluctance to impeach him), while the Democrats’ likely standard bearer could be Obama’s former VP, Joe Biden — all ‘old white men in suits’.


As for the leader of the Green Party, Jill Stein, who represents the only sane approach to governance, but committed the unforgivable crime of sitting at President Putin’s table during the ten-year anniversary of RT, in 2015, she may still be under investigation in 2020.

Posted by Deena Stryker at 6:22 AM