The 25th Amendment and ‘Democracy’’s Comeuppance

On Sunday, January 7th, a constitutional expert explained the 25th Amendment on television, in a sign that the US Congress may at last be thinking about removing Donald Trump from power. Thus far, a reluctance to see Alt-right-leaning Trump replaced by religious fanatic Mike Pence ensured that no real attempt to remove the president has taken place. But as polls increasingly suggest that the Democratic Party could regain the majority in one or both houses of parliament, Americans are at last being tutored in the Twenty-Fifth Amendment to the Constitution that spells out how a president unable to discharge the duties of his office can be removed. 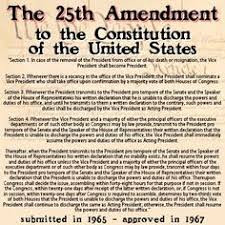 Two things in particular stand out on the American political landscape when compared to those of other prominent nations:  the first is the constant references to the Constitution, written more than two hundred years ago by men who, for all their intelligence and good will, could not have foreseen the twenty-first century. The second, perhaps influenced by that unique prominence of the Constitution, is that the United States is a lawyers’ paradise, in which litigation, rather than than a last resort in cases of discord, is the rule.

These characteristics guaranteed that the largely unanticipated election of Trump would provoke a fury of investigations and counter-investigations that makes the Watergate look tame.  The only thing people remember of that time is President Nixon (alias ‘Tricky Dick’) declaring: “I am not a crook.”  I remember following the hearings on my car radio as I drove back and forth between two small towns in Massachusetts.  Now I can watch the author of a tell-all book on the Trump White House describe himself ‘sitting on the couch in the West Wing’ and snagging members of the President’s staff as they went by for ‘casual’ conversations about the President’s ‘fitness for office’.

Michael Wolff the author of Fire and Fury, the book that makes the President’s downfall appear inevitable, explains: “When Trump won the election against most odds, most Republicans, aware of his idiosyncracies, thought: ‘Maybe this can work.’ But this is worse than anybody thought.”

Inevitably, discussions of the book involve comments about the most colorful other person in the Trump White House, Steve Bannon, editor in chief of the Alt-Right journal, Breitbart, and Trump’s closest advisor since the campaign, who left in August. Bannon’s Alt-Right agenda is never mentioned, much less the comment that he let slip last year that Donald Trump could be ‘useful’ to that movement.  After Bannon left the White House he was quoted as saying that the Trump ‘agenda’ was dead, suggesting that the President had failed to adequately support the white supremacist movement.

Trump’s fascist tendencies were a constant concern of mine during the campaign, as I wrote, among others, in an August 2017 blog http://www.otherjones.com/2017/08/when-democracy-backfires-reprinted-from.html, foreseeing a militarized state but not the Charlottesville Alt-right torchlight march to the chant of ‘Jews will not replace us!,  nor the presence of a General as the White House Chief of Staff, in addition to the National Security Advisor and the Secretary of Defense being generals. (The most troubling member of the President’s immediate staff, Stephen Miller, evokes the characters in the Italian movie about the Mussolini era, ‘The Conformist’, when he takes on the brash CNN news host Jake Tapper, in a verbal sparring match such as I had never seen before, highlighting the image of the ‘fake news’ propagator, to the advantage of the Trump spokesperson.

It is unlikely that calls by two Republican Senators for a second special counsel to investigate the former British spy who compiled the damning personal dossier on Donald Trump which set off the investigation into Russian interference in the 2016 presidential election will suffice to derail the dump-Trump campaign getting under way. It may gain impetus from the fact that having Vice-President Pence step into the president’s shoes in mid-term makes it less likely that he would be elected in his own right than if the Republican Party were to dump Trump during the 2020 election, because the public would have already experienced his religious fanaticism.

Posted by Deena Stryker at 6:05 AM