The French President is on his first official trip to Asia, praising China for commiting to the Paris Climate Accord, saying "China kept its word, demonstrating your immense sense of responsibility,"

adding, in Chinese, "Cooperation will "show the world that the French and Chinese are capable of making our planet great and beautiful again."

One of the areas of discussion will certainly be China's growing presence on the 'dark continent', which the US worries about in vain, given that Europs's involvement there dates back to the ninettenth century.
France, Great Britain and Germany, as well as Italy and Portugal all colonized large portions of Africa, but France continued to be deeply involved even after De Gaulle granted independence to Algeria in 1962, as the last step in its decolonization, after a long war. The decolonization process lasted until 1977, with the Sahara ( Sahrawi Arab Democratic Republic) still incomplete due to issues with Spain.  Throughout this period, France has continued its involvement across the vast continent, supporting French language and culture as well as security.  When Macron toured West Africa last december, he was probably the first French head of state to address popular opposition to France’s continuing military presence, ephasizing cooperation with local forces against terrorism, in a ‘we can do this together’ tone.


Most significantly for the future, France did not follow the United States' in ostracizing Mao Tse Tung's People's Republic, welcomes China's initiatives in Africa, which it sees as complimenting its own.

As far back as 1320, a Chinese mapmaker showed southern Africa  on one of his maps, and ceramics dated back to the  Song dynasty were found in Zimbabwe and South Africa.  Some tribes whose physical appearance is oriental-like with paler skin and a Mandarin sounding tonal language claim descent from 13th century Chinese sailors, calling themselves the "abandoned people."
The establishment of modern Sino-African relations dates back to the late 1950s when China "began to offer economic, technical and military support to African countries and liberation movements in an effort to encourage wars of national liberation and revolution. Today, an estimated one million Chinese citizens reside in Africa, some as private entrepreneurs, others operating  health centers, cultural centers, and development projects — including the One Belt One Road initiative that will link Asia and Europe, with a fork into Africa. An estimated 200,000 Africans are working in China, and trade between China and Africa increased by 700% during the 1990s, making China Africa's largest trading partner.

Not surprisingly, Macron launched his visit to Asia in Xian, an ancient city deep in central China which is the eastern starting point of the ancient Silk Route, in a nod to President Xi Jinping’s ambitious “One Belt One Road” initiative aimed at connecting Asia and Europe. The $1 trillion (€0.8 trillion) infrastructure project, known as “The New Silk Road” has sparked both interest and anxiety; but while some countries view it as a symbol of Chinese expansionism,  Macron heartily endorsed the initiative, saying, in an interview with the Chinese website China.org.cn:
"It represents a real opportunity to create bridges, through exchange, between countries and civilisations, just as the ancient silk routes once did," While warning that it should be carried out "within the framework of a balanced partnership" -- a reference to France's 30-billion-euro ($36 billion) trade deficit with China -- Macron proposed that France should play a leading role (presumably in persuading other European countries to get on board). Backing broad European cooperation with China, he appealed for a "strategic partnership" with Beijing on terrorism. 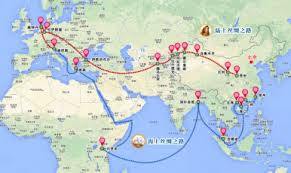 The New Yorker has been the first American publication to devote significant space to the New Silk Road Project, with a stunning layout of pictures.  Curiously, however, the article that accompanies the spread hardly mentions the trillion dollar project, "the most ambitious infrastrucgture project the world has ever known", concentrating instead on criticizing the Chinese leadership.