If You Had Been Watching - I

From time to time I plan to review foreign reporting of daily world events which are absent from the American media. 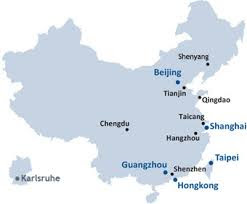 While America’s television channels hash and rehash the latest presidential tweets and the latest special counsel subpoenas, France 24 (in English) reported on President Macron’s trip to Britain, where he discussed British financial support for the migrant camps that have been set up in Calais, as well as domestic opposition to a proposed law to allow single women and gay couples to adoptchildren, and an interview with the head of an international organization set up to deal with the migrant crisis.

The extent to which Americans are shielded from — or  shut out of — the world never ceases to amaze me.  They are largely unaware that they could turn to foreign channels to find out what’s going on outside their borders. Until they gain access to the realities that in one way or the other affect their lives, they will thrash about in a sea of ignorance and delusion.
Let’s take just one headline story, global warming. In an interview, on President Trump’s economic policies on France 24, an American economist defended his decision to leave the Paris Climate Change Accord ‘because the US is being asked to do more than China’.  That interview alternated with news of the most devastating winter storms ever seen in Europe, with the Netherland’s main airport being closed to traffic, and even trains not running due to high winds.
As for President Macron’s negotiations with Britain’s Theresa May over unaccompanied minor immigrants trying to get to Britain, France’s request for greater financial assistance processing these young people who have managed to reach camps such as the one in Calais known as ‘the jungle’ are fueling a rethinking of the Brexit decision. Apparently, one of the main arguments for leaving the EU was the cost of dealing with the migrant crisis: many voters didn’t realize that per a separate treaty, Britain’s ‘border’ is located in France, and vice versa, so leaving the EU changed nothing regarding Britain’s financial responsibilities toward them. Americans who think this particular issue doesn’t concern them, they would need to consider the role Great Britain has played as Washington’s Trojan Horse in that important economic block.


P.S. While Americans know that US unemployment has continued its downward trend which began under Obama, they would have to be watching a foreign channel to learn that China, which is being billed here as slowing down, has gone beyond its projected growth target for 2017.
Posted by Deena Stryker at 11:29 AM