Perhaps in order to divert attention from the chaos in the White House, a new bellicos project is being mooted: sock it to North Korea.  A few congressional voices are heard suggesting we sit down and talk to the upstreporous Kim, (one of whose complaints, aftr all, is that we never alllowed a Peace Treaty to end the Korean War...) but they are drowned out by those suggesting the US get rid of this pest once and for all --  China be damned.

In my forthcoming book 'Russia's Americans' I predict that the US will do a trial run at world war by attacking North Korea, leaving Russia and China for later.  (Iran might usefully be taken down as a second prologue.)  You know something serious is afoot when they start quoting Lindsey Graham.... For once, an anchor seemed really unnerved.  He was not faking it when he implored Graham:  "Do you really mean that you would vote for a war that would kill thousands of people???  The Senator answered with finality: "If people have to die they're gonna die over there," seeming not to realize that North and South Korea are joined at the hip, the latter 'protected' by US servicemen.

Meanwhile, MSNBC just announced that the president has asked the Justice Department to investigate the effectiveness of affirmative action in college admissions policies, with the possibility of suing those who fail to give a fair chance to white Americans, perhaps to assuage Trump's base, as health care becomes the opposite of what the president promised in his campaign.  (The department of Health, Education and Welfare long ago ceased to exist...)

The mix of foreign and domestic policies taking shape under President Trump gives pundits a lot to argue about, starting with whether the president is a fascist -- or whether he is throwing bones to his fascist backers in order to eventually be able to avoid nuclear war with Russia and China.

I wouldn't count on that.
. 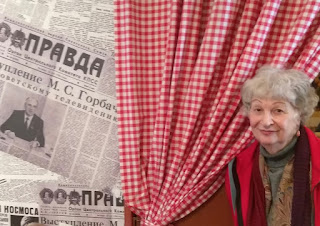 In a writer eatery on Arbat Ulitsa, Moscow, May 2017