Caught Between a Rock and a Hard Place

That's not usually where presidents (whether of boards or countries) find themselves, but it's hard to see Donald Trump differently: on the domestic front, neo-Nazis -- more politely known as white supremacists -- hug him too close, and on the international stage the Deep State is making him jump for the candy: he will only be allowed to postpone aggression against Russia if he goes along with seriously chastizing North Korea -- and perhaps Iran.

Caught in the middle of this disastrous situation -- the US president is seen as the most powerful man in the world -- Trump can only displease his masters, no matter what he says or does.  Consider:

His former White House chief of Staff -- Republican stalwart Reince Priebus --is being investiaged in connection with so-called Russian interference in the presidential election; a former campaign manager, Paul Manafort suffered the indignity of a dawn raid on his home, from which the FBI took away anything they wanted; White Supremacist Steve Bannon, who helped him get elected when he was in charge of the Alt-Right Breitbart News, still has access to the Oval Office notwithstanding a no-nonesense general as chief of staff, while Sebastian Gorka, with his Oxford accent is being outed as a former member of a traditional Hungarian Nazi organization that flourishes again under the presidency of Viktor Orban; and Mike Cernovich, an Alt-right media figure is being scrutinized for the anti-feminist and male empowerment tirades with which he defends Donald Trump.

Trump can neither escape the unwanted embrace of his Alt-right supporters nor claw back the imperial presidency from the Deep State and a Congress that cares more about its power than avoiding terminal nuclear war.  The latest development in this charade is that a few feeble Democrats hope they can get legislation passed that would prevent the President from using nuclear weapons in a first strike without its 'approval'.

If anyone has doubts about Trump's sympathies,  the clueless mother of the young man who mowed down a crowd trying to oppose White Supremacists in Charlottesville, killing one and injuring nineteen, referring to her son's politics said: "I thought it was about Trump." 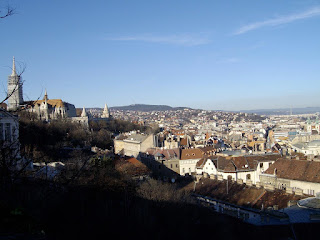 View of Budapest from the 'Castle'
Posted by Deena Stryker at 2:28 PM