I just picked up a review of two books on China in Sunday's Times titled 'China's World' which assesses works by an academic and a journalist, both of which appear to ignore important details.

The purpose of the review, titled China's World is to discuss the chances of war between the outgoing great power and the rising one being avoided.  A famous historical example of this not happening is called the 'Thucidides trap', and refers to the unsuccessful efforts of Sparta and Athens to avoid war, due to hubris and paranoia.

How well thse adjectives describe US behavior!  Our airwaves are abuzz 24/7 with analyses suggesting that 'foreign powers' (an interesting way to refer to 'the Other'...) are bent on our destruction.  It is true that a recent Pew pole, quoted by RT, found large numbers of citizens in
countries that are our allies who consider the US to be 'the greatest threat on earth'.  I was not able to find that particular item in the pole I found at http://www.pewglobal.org/2017/06/26/u-s-image-suffers-as-publics-around-world-question-trumps-leadership/

"In just four of 10 EU countries surveyed is the public positively inclined toward the U.S. The most widespread support is found in Poland (73%), Hungary (63%) and Italy (61%). In spite of the “special relationship” between America and the United Kingdom, only 50% of the British see the U.S. favorably. The most negative views of the U.S. are in Germany (62% unfavorable), Spain (60%) and the Netherlands (59%). And in the past year the share of the Spanish public that expresses a very unfavorable opinion has roughly tripled from 7% to 23%".

"Only about four-in-ten Canadians (43%) and Russians (41%) express a favorable view of America.
And large majorities consider President Trump 'dangerous', (which caused RT to claim that public opinion in these countries ocnsiders the US to be the biggest global threat). 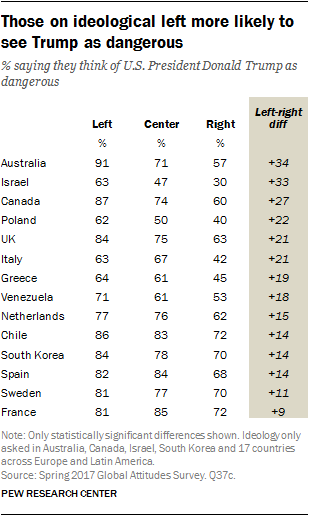 Getting back to the China article, I was shocked
- but not surprised - by its reference to China's
One Belt, One Road project,which, it says, will 'bind a huge swathe of Asia to China' without mentioning the fact that it will bind Europe to Asia.  That, in fact, is what the project is all about.  And it includes not just rail and road links, but shipping links as well.

China's 'projection of economic might through the
new Asian Infrastructure Investment Bank' might
cause a careless reader to forget that its economic
might has long been illustrated by its buy-ups of
American real estate, companies -- and US Trea-
sury notes.

The article could not fail to point out the 'Chinese
land grab' in the South China Sea, while apparen-
tly having no opinion on the presence, in China's
home waters, of US warships, known in Obama's
days as the 'pivot to Asia'.  Yet it's the same as if China were to sail into the Carribean.

But then again, the US media stayed mum when
Russia and China held naval exercises in the Baltic Sea --as NATO forces camp on Baltic, Polish, Romanian and Bulgarian lands, right up against their borders with Russia.
Posted by Deena Stryker at 2:38 PM