As Defense Secretary James Mattis tells troops to be ready for all eventualities regarding North Korea, Rachel Maddow is still banging on about Russian bots and Russian ads. But far from disrespecting the journalist’s obligation to privilege war and peace over trivia, she is, in fact, doing just that, by building a case against Russia: While RT’s Peter Lavelle and his pundits mock Washington for claiming that Russia is responsible for every little thing that goes wrong, she is accumulating evidence that will make Russia look responsible for US casualties in South Korea and wherever else our insane president drags us.
What the bots and the ads — only now being judiciously released to the public — are intended to show, is that it’s Russia’s fault that America has for President a ‘moron’ who has turned the White House into an ‘adult day care center’ and cannot be prevented from launching a crazy war. The Korean War ended in 1953, and since then the US has refused to recognize the regime that fought it to a standstill, making it a pariah on the world stage. Not only does North Korea have a legitimate grievance, the US pretends that it has not been interested in negotiating for sixty-four years — almost as long as the Nakhba. This only became an acute problem, however, when Kim Jong Un succeeded in building a weapon that could kill massive numbers of Americans.
Although there have been twelve presidents since the Korean War ended, none of them has been willing to accept “a peace of the brave”, and now this failure has become a handy excuse for striking Russia before turning against its ally China, the rising power. With Kim’s unwitting cooperation, Obama’s Pivot to Asia can now be seen as a counter-intuitive approach to eliminating both adversaries — the first step being getting rid of China’s protege, North Korea.  When Obama warned the new president that this little country would be his biggest problem, I wondered why. Apparently, Washington had decided that the time had come to reawaken this particular sleeping dog. 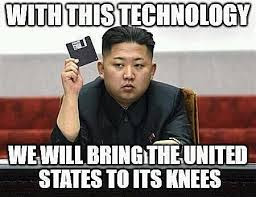 Posted by Deena Stryker at 2:11 PM