During this week I've signalled the International Festival of Youth and Students taking place in Sochi Russia, http://www.otherjones.com/2017/10/winning-friends-and-influencing-people.html  pointing out that Russian President Valdimir Putin has developed a very effective way of 'making friends and influencing people"; but I did not know until yesterday that he has brilliantly pulled off a two-fer, by scheduling the twice yearly Valdai Discussion Club meeting during the same week and in the same city as the youth festival.  As a result, young people from around the world, whose media never report on the Valdai discussion group, have become aware of it and of the discussions themselves, while the high-powered people (heads of state, business and cultural leaders) members of the Valdai Club have discovered the existence of a long-standing, progressive international youth program that has been organizing meetings since 1947!

I have just spent an hour and a half reading the English language transcript of the closing session of the Valdai meeting, and I encourage my readers to do the same by clicking on the link below.  They will have access to an hours-long dialogue between the Russian president and several dozen foreign participants which, better than any news story reveals how he and they think, what they believe in and where they hope the world will go http://en.kremlin.ru/events/president/transcripts/55882.  The difference between these participants and America's first and fourth estate makes clear that the US's anti-Russia hysteria is intended to prepare citizens for the inevitability of World War III. 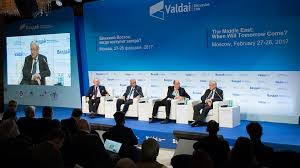