I keep having to play catch-up with this blog.  Now that I've not writing any more books,  I'm going to concentrate more on near-daily observations of the big picture, after they are posted on NEO. 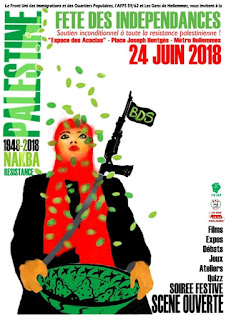 Today, I'm taking the liberty of reposting a short but fundamental analysis of the reasons for the migration crisis that is affecting both Europe and the US, by the internationally known known foreign policy analyst,  James Petras.

It is illustrated by this beautiful French poster disseminated by Giuseppe Zambon, an Italian left-wing publisher located in Frankfurt Germany,  who for years has been ensuring that contributions by a wide range of observers reach a wider audience through his mailing list.  (His email address is zambon@zambon.net, the company is Zambon Verlag.)

As for the poster, it illustrates Zambon's years' long backing of the Palestinian cause  via the importation of Palestinian olive oil which is made available to his readership.  This is but one example of how much more intimately European progressives are involved in the Palestinian struggle than those of us in the US, for obvious geographic reasons.

Posted by Deena Stryker at 7:02 AM