Forget election tampering; forget Hillary’s emails and the role a recluse in the Ecuadorian Embassy in London may have played. Realize that the ‘attack on our democracy’ was all about playing for high stakes on the international game board.

The US cannot be sanctioned for playing world policeman, and its president can simply be impeached for ‘high crimes and misdemeanors’ instead of being sent to jail for ‘white collar crimes’. Either way, realizing that the US is unlikely to soon become the cooperative political player called for in the UN charter, Russia, China, India, Brazil and South Africa have begun designing a new world order that takes UN principles literally: instead of an eleven-member Security Council, five of which can veto resolutions, the BRICS are constructing a multi-polar world in which the most influential countries in each region cooperate to ensure the peace and development of the world.

Russiagate has revealed the ease with which globalization’s rules can be exploited, overshadowing the world’s real political and economic problems. And as long as audiences — especially in the US — are obsessed with the pursuit of political ‘crimes’, war crimes will continue unabated. I’m not saying that this situation was created deliberately, however it is impossible to deny that it has pushed the Iran Nuclear Treaty into a background where National Security Advisor John Bolton and Secretary of State Mike Pompeo can ensure that it is never revived, making way for eventual ‘regime change’ in Teheran, and making it less likely that North Korea’s young leader will give up the weapons that forced the US to talk to him.

These and other nefarious plans, such as fomenting color revolutions in Russia’s near abroad (one recently came to fruition in tiny Armenia), can be all the more easily pursued that the public associates international money laundering and bank fraud with ‘Russian oligarchs close to Putin.” Americans have never been told that when he came to power in 2000 on the back of state pilfering under ‘our man in the Kremlin’ Boris Yeltsin, Vladimir Putin made a deal with those who had become ‘oligarchs’ via those privatizations: “You will be free to continue your games as long as you leave politics up to me.”

All those Russian names that are (with difficulty) coming out of the mouths of English-only American anchors have nothing to do with the war in Syria or the rebellion in eastern Ukraine, let alone the impending reunification of the Koreas after 65 years of a barbed-wire truce. They have to do with bank fraud and money laundering, which were once the realm of gangsters. What the Muller investigation has revealed is an international ‘crime syndicate’ whose claim to fame is its association with the President of the United States (and suggestions that is associated with the President of Russia).

But rather than being a strongman who uses his power for personal enrichment, such as for example Panama’s President Noriega, Putin’s relations with shady oligarchs are probably more like those of the Kennedy brothers, Jack and Robert, with Meyer Lansky and his cohorts based in pre-Castro Havana. (When, fifty years later, I read about the mob’s ‘interest’ in the Cuban revolution, I realized with a shudder that they were lurking in Havana when I arrived there a week after the Kennedy assassination.)

Russiagate shows how far the US has regressed since the days of Camelot.  On the day I submitted this article to NEO, the US media played and replayed a tape of Trump lawyer Michael Cohen threatening a journalist who was gathering information for an article about his client in the tone and using the language of a typical mobster..... 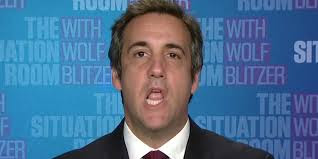 Posted by Deena Stryker at 6:35 AM