Living in the Truth

Posted on NEO Juune 30, 2018
The reunification of Europe was still three decades away when, in 1963, the playwright Vaclav Havel presented his first works in Prague’s Theater of the Absurd, ushering in the transformation of the historically staid Czech culture into a whimsical one that contributed to the downfall of Communism in Eastern Europe.

The man who was to initiate Charter 77, criticizing the Communist government for failing to implement human rights provisions of a number of documents it had signed, including the 1960 Constitution of Czechoslovakia, the Final Act of the 1975 Conference on Security and Cooperation in Europe (Basket III of the Helsinki Accords), and 1966 United Nations covenants on political, civil, economic, and cultural rights, was ultimately voted the first President of the Czech Republic from 1993-2003.

Vaclav’ Havel’s movement was associated with the notion of ‘living in truth’, which implied ceasing to cooperate with official Communist claims of democracy. At a time when American intellectuals increasingly disregard facts that are part of the public record, historian Timothy Snyder publishes a pocket-sized book titled On Tyranny, in which (after saluting the great philosopher Hannah Arendt, who wrote The Origins of Totalitarianism) he urges Americans, among other things, to support the mainstream media, realizing that “some of what is on the internet is there to harm you”. He further advises his readers to “make eye contract and small talk as a way of breaking down social barriers”, “contribute to good causes”, “be a patriot” and “be calm when the unthinkable arrives”.
Snyder, who specialized in Eastern Europe, began his crusade for ‘the truth’ by drawing western attention to Vaclav Havel’s philosophy back in the eighties. For Havel, ‘living in truth meant keeping a sacred space for what you can prove to be true and for truth-tellers, and Snyder runs with the notion that self-deception enables tyrannies to spread. And yet, with his string of goody-two-shoes recommendations, he implicitly protects media intellectuals such as Fareed Zakaria, who have access to a much larger, and even less educated public.

In his latest weekly program, MSNBC’s authority on truth reported on the Scandinavian countries’ recent decisions to beef up their military and instruct their citizens in how to behave in the event of war with Russia.

WITHOUT ONCE MENTIONING the presence of thousands of NATO troops on Russia’s borders with Europe, from the Baltic to the Black Sea, Zakaria wants Americans to know that even the historically neutral Scandinavia countries are taking a stand against ‘Russian aggression’. Here is a map from my book Russia’s Americans that shows the location of US bases most significant for Russia. from among its thousands around the world. 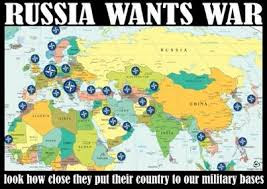 This stark reality is kept from the American people, although it accounts for Vladimir Putin’s decision to ‘stand Russia’s ground’ on its side of the border. That decision, reflecting the first duty of any responsible leader, is presented by the Western media as ‘Russia poised to overrun Europe’. Vaclav’ Havel’s principal of ‘Living in Truth’, espoused by Cold War activists across Eastern Europe proved so inspiring that in 2018, intellectuals still invoke it to justify positions that are the exact opposite of those Havel espoused, as the drumbeat of war continues uninterrupted from the time the world was divided between socialists and capitalists.

It has become clear to at least a few of us that although it’s no longer ideology that’s at stake, it’s still ‘Russia’, a country whose open plains were invaded from the East, the South and the West. To accuse Russia’s leader (who has been in office only two years longer than the Turkish President just re-elected for the third time in a process of dubious legitimacy) of seeking to ‘recreate the Russian Empire’ is a curious way of describing repeated US-led efforts to gnaw at Russia’s European borders. In 2008, the US backed Georgia’s separatist neighbors, and when that effort fizzled, the US State Department openly funded democratic forces in Ukraine, but allowed them to be subsumed by Neo-Nazi militias. When these militias attacked its countrymen living there, Russia defended them and was promptly accused of invading its neighbor, as when it permitted those living in Crimea to hold a referendum on reunification.

Although the Crimea referendum relies for its legitimacy on the 1996 Kosovo referendum organized by NATO to formalize that region’s independence from Serbia, the US accuses Russia of modifying the post World War II borders agreed upon in Yalta by Roosevelt, Churchill and Stalin, while, advising Russia to ‘get used to’ seeing US warships off the coast of its main warm water naval base in the Black Sea….

It took Vaclav Havel, the Polish historian Adam Michnik and the trade union boss Lech Walesa, who would become Poland’s first post-communist president, two decades to reclaim their countries’ respective realities (together with the Slovaks, Hungarians, Romanians and Bulgarians). Those of us who compose today’s American opposition are powerless to end our government’s selective use of information, as well as its physical abuse of the world outside our borders, whether in post-United Fruit Central America, the rape that drives Africans into Europe, or attempts to persuade Pacific nations that the China Sea is not Beijing’s Mare Nostrum.

Our voices can scarcely be heard, as the personal space reserved for truth closes in around us.

It seems that the publication of Timothy Snyder’s pocket-sized book was the start of something. (‘Tyranny’, by the way, was a much-used word during the American (and French) revolutions, and thus has a more solemn ring to it than the words ‘dictatorship’ or ‘oligarchy’ or ‘authoritarianism’, commonly used today to express the same notion of injustice.)

In the last few weeks, there has been a concerted campaign by the US media to promote itself. This must mean that the readership of progressive websites is reaching an alarming rate. On July 2, the New York Times ran an add on the internet stating that The Truth Demands our Attention (sic).
Posted by Deena Stryker at 11:38 AM