How do you take the most powerful country in the world to war with a tiny but obstreperous country on the other side of the world without informing the public of the reasons for that nation’s ‘misbehavior’?
The American media has failed to note that the North Korea crisis just happens to coincide with the meeting of the BRICS in Xiaman, a resort island in Southern China, in the same general geographic vicinity.
Further, no mention is made of China’s One Belt One Road infrastructure project which will link Asia to Europe: surely China doesn’t need a nuclear showdown with a participating country.
For the first time, today MSNBC has acknowledged that North Korea’s goal is to head the reunification of the peninsula. But it still has not yet mentioned the fact that the Korean War ended without an armistice, the North, since 1953, considered an outlaw regime in the West, although it is recognized by the former ‘Soviet camp’ and is a UN member.
The conventional wisdom that Kim Jong Un is developing nuclear technology in order to not end up like Saddam Hussein or Ghaddafi is only half the story.  As sabers begin to rattle in Washington, this lack of information is unlikely to be remedied. The Korean leader may be acting like a spoiled child: in reality, he is a child who has decided that the only way to get attention is to pee in the sand pile. 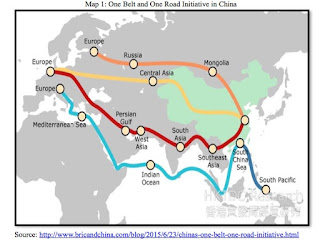 The danger is that President Trump and his generals may not be inclined to pass up the opportunity to impress China with their latest weapons and strategies, aware that together with Russia, it poses a threat to American hegemony.