America First — or the First American — at the UN 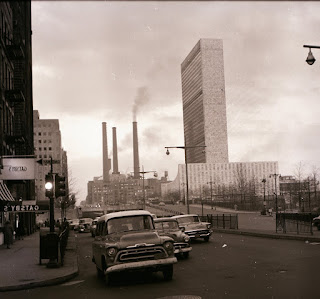 Suddenly, it’s upon us. Our President, considered by most educated Americans to be “unfit for the job”, makes his debut in the world’s premier forum tomorrow morning.  The US media has been so focused his tweets, his approval numbers, the ‘Russia did it’ investigation, that this once-a-year event seems to have snuck up on them.  Or, no, wait a minute, it’s not that: it’s that the UN counts for beans in the minds of America’s news stalwarts.  In fact, they now refer to the United Nations General Assembly off-handedly as ‘UNGA’, which, when uttered, sounds like someone trying to talk through gritted teeth.
The Russian President will not be attending the opening of the UN season, which for most heads of state is a unique occasion to be heard. Vladimir Putin is heard by most of the world on many occasions (although not in the US), and he probably decided that his presence in New York would feed speculation about a possible meeting with Trump, which in turn would stir up speculation about Russia’s so-called interference in America’s so-called democracy.
Did President Putin deliberately choose this period to hold joint exercises with Russia’s neighbor and ally Belarus?  In any case, they are grist to NATO’s claim that Russia poses a threat to its neighbors, whom it ‘protects’ with troops and tanks stationed on their soil.
The news this morning is of the US and South Korea holding joint bombing drills in response to North Korea’s latest missile launch. What difference could there conceivably be between that exercise and Zapad, the Russian/Belarus drill?
This brings me by a circuitous route, to the debut, last night, of Ken Burns’ series on the Vietnam War.  Burns is perhaps the most admired American documentarist and he has focused on American history. Burns could be said to have done it again, were it not for his failure to mention the Yalta Agreement between Roosevelt, Churchill and Stalin which, at the end of World War II, divided Europe into two zones of influence, the East being allotted to the Soviet Union, the West to the US and fig-leaves Great Britain and France.
Flying in the face of these facts, Burns alleges that the Soviet Union ‘took over’ Eastern Europe, posing a threat to the Western half as well. In reality, the Soviet Union took all its troops home from the Eastern countries when Europe was reunited starting in 1989, while the US now has bases not only in Western but in Eastern Europe as well.  According to a 2012 Heritage Foundation report: “Today, the U.S. has approximately 80,000 military personnel in 28 main operating bases in Europe, primarily in Germany, Italy, the United Kingdom, and Spain.” Since then it has opened NATO bases across Eastern Europe, while even historically neutral Sweden is drawing closer to NATO, as it beefs up its military, causing President Putin to issue a warning last June.
Coming back to the UN, President Trump invited other leaders to a meeting to discuss reforms to the creaky but indispensable organization. According to a statement by National Security Advisor HR McMaster, Trump will seek to promote America, as well as ‘accountability and sovereignty’. Accountability clearly refers to the US demand that other countries contribute more money to the UN, while ‘sovereignty’ if it has any meaning at all in the UN context, can only be a sop thrown to the Russian President, for whom it is a basic principle. (Russia justifies its presence in Syria, at President Assad’s request, as a commitment to the country’s sovereignty, which is under attack by an (uninvited) foreign power, the US, as well as by ISIS and other terrorist groups.)


This afternoon MSNBC is speculating that contrary to every rational expectation, exposure to the premier legislative body in the world is moving Trump toward a more traditional presidency. That would only be a positive development if the American President had the power that theoretically goes with the office, as opposed to the deep state, and if Trump had not had the ill-advised idea of surrounding himself with generals.

Posted by Deena Stryker at 2:28 PM