The Economist’s Latest Stab at Journalism

The Economist, a British weekly devoted to politics and business, has been published continuously since September, 1843. In 2015, its average weekly circulation was a little over 1.5 million, about half of which were sold in the United States.
This is no small-time rag.
That is why, when it lies, my rage is almost physical.  I cannot understand how it is possible for those who write and edit the Economist — and I am referring in this specific case to its publisher, a lady by the high sounding name of Zanny Minton Beddoes — to commit to print egregious lies with the confident tone of pure truth.
In its latest issue, Beddoes writes, without a qualm, that:
“Perhaps because Vladimir Putin, Russia’s president, thought the CIA was fomenting an uprising in Ukraine, the Internet Research Agency, backed by an oligarch with links to the Kremlin, set up a trolling team….”
This is even worse than the US MSM professing to believe that Putin made mischief to get back at Hillary for inciting riots ahead of his last election.  For deceit outranks stupidity.
A few lines later, Beddoes declares, with the solemnity of an Oxford don:
“For democracy to thrive, Western leaders need to find a way to regain the confidence of voters. This starts with transparency.” 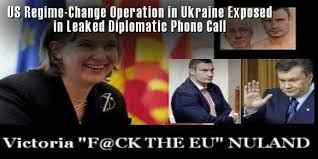 Those who believe the MSM claim that we helped democrats win in Ukraine, should read this: https://consortiumnews.com/2015/07/07/ukraine-merges-nazis-and-islamists/ .
The Economist’s publisher warns that  “Conspiracies are wrong in themselves and their extent raises worries about the vulnerabilities of Western democracies.”  Maybe coups d’etat don’t qualify as ‘conspiracies’…?
Finally, Beddoes admits that “Retaliation and deterrence also matter—not, as in the cold war, through dirty tricks, but by linking American co-operation over, say, diplomatic missions, to Russia’s conduct and, if need be, by sanctions."She tries so hard to sound worldly — the Economist’s default style —that we can only guess at the more complicated thought she was trying to convey.

Posted by Deena Stryker at 4:39 PM