Applause as the Sound of Desertion 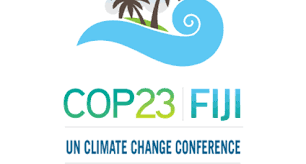 Today, French President Emanuel Macron laid out detailed plans for avoiding a climate disaster at the current session of the international organization devoted to that goal, which the US has abandoned. When Macron mentioned that US dues to the climate organization known as COP (Conference of the Parties, referring to the countries that signed the 1992 United Nations Framework Convention on Climate Change) would be met by increased contributions from the other member countries, in particular Europe, enthusiastic applause broke out among the participants.
Normally, requests for money for international projects are met with silence, even on the part of countries that will eventually loosen their purse strings. Today, the spontaneity and length of the applause at the twenty-third COP conference (COP 23) was a stunning reflection of Europe’s new-found independence from the US.  Not that Europe has become richer, like an adolescent who now has a job and can afford to dispense with parental aide, on the contrary. But after seventy-five years of playing junior partner to the US, Europeans are actually relieved to be expected to pick up the tab, as they become part of a more egalitarian Eurasian geo-political community.