What better way to end five months of silence on this site (But not on NEO!) than to mention that in February, 2007, I wrote http://www.otherjones.com/2007/02/obama-breath-of-fresh-air-hillary-draft.html that Obama would win the 2008 election for which he had just declared, before framing the even earlier start to 2020?

The promises that America's only Black President made were hardly realized during his two terms, but progressives have a leg up this time, due primarily to one monumental change: thanks to Bernie Sanders, whom the Democratic Party prevented from being the candidate in 2016, socialism is no longer a dirty word in the United States.  The condemnation now is a pursed-lip "too far left", and Republicans admit that Dems had make room for a clutch of young, progressive candidates, starting with a girl from Brooklyn named Alexandria Ocasio Cortes, who defeated a long-time incumbent in the primaries and went on to sweep her district.  Scarcely arrived in Washington, she posted a video of the little-known corridors of power for her voters, assured Nancy Pelosi of her support for the speakership and submitted a bill outlining a green/slash jobs program backed by live supporters.

AOC's feat coincided with the appearance in a Texas Senate race of another maverick, Beto O'Rourke (whose handle became a household name when he lost to a well-known  former republican, presidential candidate Ted Cruz.  Rarely, if ever, has defeat lifted a candidate -- expecially a newcomer who isn't afraid to use his paddle-like hands.  It seems that each presidential election year the media begins its campaign earlier than the last, thus even before Christmas, the first polls have appeared.  They immediately placed two septagenarian politicians, Joe Biden and Bernie Sanders, in the thirties, while Beto soon caught up, prompting a new poll question: "Would you prefer a total newcomer?"

Is it the two men's visible difference from the pack -- Obama's color and Beto's height -- that attracted early activists?   I'm inclined to believe it's the ring of truth that emanates from both: no matter how many politicians parade across the television screen on any given day -- or perhaps because of their great number -- audiences unerringly recognize the rare person who appears to mean what he says.  Here again, Obama and Beto coincide: Obama sided with the establishment while talking the people's talk, while Beto appears more left than a member of the House's New Democrat  Coalition, that aligns with business, can be.  That is why Bernie's followers have declared war on the man whose appeal is more visual than substantive.

The Democratic Party will do everything it can to prevent Bernie from being its candidate, as it did in 2016, altough lacking a presumed establishment front runner. As when it backed a Hillary who talked the progressive talk while walking the liberal walk, it could conceivably get behind Beto, who evokes the Obama of the campaign trail while siding with those he favored.  It will do whatever it takes to limit the possibility that socialism actually comes to America follwing the coming Trump debacle, however this time it may not succeed, as I recently suggested in New Eastern Outlook https://journal-neo.org/2018/08/16/after-100-years-socialism-comes-to-america/,

As for the first to announce, Senator Elizabeth Warren of consumer protection fame, I understand why Bernie passed on her as VP in 2016. This time, he should not hesitate to choose his acolyte, Alexandria Ocasio Cortez, a young woman from Brooklyn who defeated an incumbent in the primaries backed by the Demoractic Socialists of America whose grass roots campaign sent her to Congress. Upon arrival, she deftly assured Nancy Pelosi of her support while making it clear, in the presence of supporters, that she expected her to back her proposal for a Green New Deal.  AOC, as she is already being called (as MBS fades from favor and RBG continues to inspire movie-makers) is much moore likely to draw 'Me too' support than the brittle Warren who includes her husband holding the leash of the family dog in her early pitches. 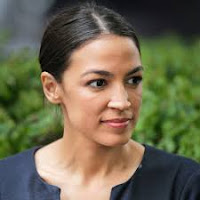 Finally, I would encourage Bernie to name the members of his future cabinet, to include newcomers from the growing socialist community.

Posted by Deena Stryker at 6:08 PM