Dotting a Few I’s and Crossing a few T’s

As US channels concentrate on the latest mass shooting in Oregon, France 24 and Russia’s RT cover in detail the meeting in Paris of French, German, Ukrainian and Russian leaders, which was called to discuss Ukraine, but now will be partly devoted to Syria, where Russia has carried out bombing attacks against ISIS to the embarrassment of the Western-led ‘coalition’.

I’ve been wondering about French President Francois Hollande’s blasts against Syrian President Bashar al-Assad, given France’s long-standing ties to Syria, which are reflected for example in the fact that the Syria’s school system is still modeled on the French, not to mention that both leaders are socialists. It finally occured to me that Hollande is doing what any French socialist President knows he has to do with respect to the US: being more royalist than the king.  While center-right leader Charles de Gaulle was free to behave as obstreperously as he liked, Francois Mitterrand, the Socialist who presided France from 1981 to 1995, set the pattern for a socialist leader to demonstrate his bona fides to Washington by being an impeccable foreign policy ally. Francois Hollande is following suit, even though the fact that Russia now has an independent-minded president recreates a situation similar to the one that held sway during the Cold War, in which France carefully calibrated its alignment with each of the superpowers.

The other issue that deserves mention here is the Western  effort to retake a key Afghan city, Kunduz, from the Taliban.  These Islamic fighters have been in the news since we trained them against Russia in the nineties, and fourteen years after we invaded Afghanistan in retaliation for harboring Al Qaeda, they are still successfully fighting the US-installed government.  Though I have not heard it mentioned, isn’t it likely that the rise of ISIS has given this group a new lease on life?  Will they not at some point declare their allegiance to the Caliphate, signaling a (momentary) eastern boundary to the entity currently holding areas of Syria and Iraq in the west of the Eurasian continent?

Both of these issues point to the reshaping of foreign interventions in the Middle East and Southwest Asia to reflect Russian interests: while the United States’ presence on the Eurasian continent is about access to oil, Russia’s attitude toward the resulting chaos is primarily about ensuring that the Muslim majority ‘Stans’ - the countries on its southern rim - remain peaceful.  I’ve written about President Putin’s attitude toward Islam before: http://otherjonesii.blogspot.com/search?q=Putin+attitude+toward+Islam, http://otherjonesii.blogspot.com/search?q=Putin+attitude+toward+Islam , which is to encourage development.  That is why, after careful consideration, he has acted in Syria: when Prime Minister Lavrov declared yesterday in his UN press conference that Russia considers ISIS to be an existential threat he was not referring to a ‘recreation of the Soviet Union’, but to the need for Russia to maintain close relations with its southern neighbors, a policy that any intelligent leader would pursue.

It is being suggested today on US TV channels that President Putin is successfully pursuing a quid pro quo with his Western counterparts at today’s Paris meeting: quit accusing us of dark designs on Ukraine (removing the sanctions) while staunch the number of Syrian refugees crowding your beautiful cities by bombing ISIL targets that the US has spared in its determination to remove Assad.
Whatever the Russian president does, or fails to do, commentators try to make him look bad.  But while the docile French socialist president feigns support for US policy, the more powerful conservative German Chancellor takes the lead in tilting toward Moscow.  All are players on the Eurasian continent, while the US is two oceans away.

P.S. France 24 reported that Francois Hollande came down from the Elysee Palace steps where he usually greets visitors to meet Vladimir Putin in the courtyard, saying "Welcome President Vladimir", adding that he had mishandled the Russian President's name: what foreign viewers don't know is that this was Hollande's way of signaling fraternity.

P.P.S. Below is an experiment with uploading photos. 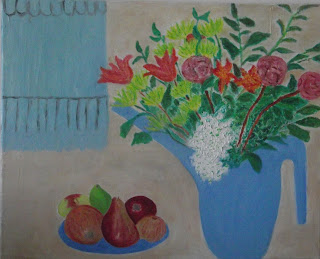 Posted by Deena Stryker at 3:28 PM